I just got a “European bundle” (+ a few extra CTs), and have followed the setup guide until the CT configuration part. But when I click the CT around a cable, I see no power draw.

I’m just testing things, so I’m clamping “random” cables, but I’ve tried a few that have significant load (a couple of servers and most of the networking equipment). Since we have three phases here, I also tried clamping it around the same extension cable where I also plugged in the VT, just to be sure it was on the same phase (with a few other things plugged in as well, to be sure there was at least a few 100 Watts power draw). I’ve tried both the 50A and 100A versions I have (with the 50A version in input 1, model AcuCT H040-50, and the 100A in input 2, model AcuCT H063-100). 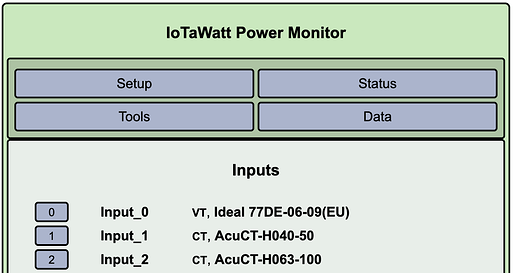 At most, I’ve seen the input briefly go up to 3-5 Watt, just as I closed the CT around. But only for a second or so while closing it. And only for the 100A CT, I see nothing for the 50A CT. I’ve tried attaching the CTs both ways, and with or without the “Reverse” box checked. The voltage is measured just fine, it seems (though I didn’t calibrate).

From here, I’m not really sure how to troubleshoot. I followed the guide pretty much to the letter, the only exceptions being that I chose the Ideal 77DE-06-09(EU) VT model, since this is what’s printed on the version that came with the kit, as well as chose the corresponding correct models for the CTs as mentioned above.

Sounds like you are installing the CT on appliance power cords. Those cords have two conductors. The current goes out in one of the conductors and back in the other, so they cancel each other out and you get zero.

The CTs must be installed on only one of the conductors. Typically that is in the distribution panel.

Ah, OK. That (conductors) is where they will be installed. I was just trying to test, and se things up, so I felt more confident telling the electrician what to do. Guess I’ll have to wait for him.

Thanks for the pointer!