I’m having an issue with my set up and things showing inaccurately. I’ve made sure there isn’t any paper on CTs and I’ve reset them several times but they revert back to low power factor and not reading properly.

Panel A with issue- 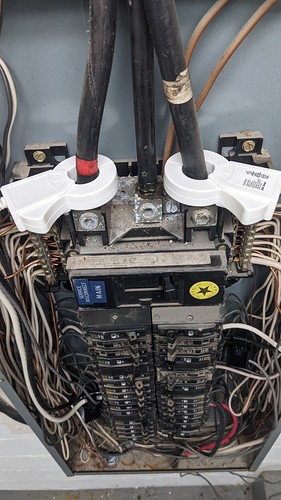 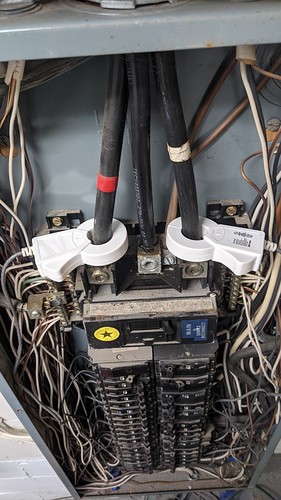 Given that both of the mains on the one panel are reading the same low PF, I would discount the possibility of it being the CTs.

145W is a pretty low amount of power through a 200A panel. It also looks to be a 240V load given the nearly identical power and PF on the two legs. Do you know what that load is? Could it be a very reactive load that actually is PF .21? What happens if you activate some larger loads on that panel? Is there a plug that you could connect a hair dryer or toaster to see if you get a high PF?

Another possibility is that the two panels could be fed from a different source and need independent voltage reference. Are both panels fed through the same meter? Is there anything unusual like a powerwall system?

I’m in US. As far as I know it’s all on the same meter. I would reseat the CTs and it would show 80’s and 90’s and then drop to the 20’s. many of the lines go to outlets not in use most often. I have 2 dehumidifiers that aren’t running at the moment, HP water heater, fridge that is running, dishwasher, and 2 HP miniplsit systems that are off. I hooked up a hair dryer and here is the result from 2 different outlets from each side of panel.

The power factor (and power) looks fine when running the hair-dryer. I’m going to stick my neck out and say that the .21 PF is probably correct for whatever that load is.

In the second shot, with the hair dryer on Main2, the same old baseload is there at PF 0.18.

So you need to identify that baseload to explain it. The minisplits are probably inverter and probably 240V. When you say they are off, do you mean that they are off with their thermostat (or remote control) or off at the circuit breaker. I had a Daikin minisplit that used from 15W-30W when off with a PF of 0.21. Those units run off an inverter which has very low power factor with no load. You say you have two, so that could explain it. Try switching off the breakers to those HPs and see what happens. It’s normal for them to have very low PF when “off”.

The splits(mitsubishi hyper heat) are off by remote when I took the screenshots above. There is one minisplit on each side in the panel so here is the screenshot with them off. Since earlier the water heater and now a dehumidifier are running. Once those items kicked on the pf went up. When turning off the minisplit the pf seemed to go up as well. Sounds like everything else is off in the house and the splits are being powered it pulls down the pf?

Sounds like everything else is off in the house and the splits are being powered it pulls down the pf?

You can see that it maintains a decent power factor whenever it’s actually running, but when it stops, the PF goes down to .125. But power factor means nothing when the thing is drawing 4 Watts.

I suppose you can envision that the HP “pulls down” the pf, but actually, the interaction of various devices at different pf is very complicated. You could have a very inductive load with a low pf and a capacitive load with a low pf that when measured together upstream would look pretty good. I’m getting in over my head here, and a pedantic EE would already be howling, but as I understand it, they could work in a symbiotic fashion each using the reactive power that the other produces.

Bottom line, your system appears to be working correctly.

Thanks for all of the help and education. I’ve got to hook up the rest of the CTs I have, primarily interested in how much these new mini splits are adding, this winter was a bit of a shocker with how much electricity was used. I shut off the 36K and left the 24K running and electricity dropped dramatically when it was actually colder and more snow. Want isolate and see if that bigger unit is working as it should be.

It is the case that inductive and capacitive loads will cancel each other out. If they are the same magnitude reactance (but one capacitive and the other inductive) then they will fully cancel out and the load when measured at the switchboard would look completely resistive (pf=1).
Example using imaginary numbers
Inductive load = R + jX
Capacitive Load = R - jX
Combined load = R + jX + R - jX = 2R that is fully resistive.

Also switchmode type power supplies (converting AC to DC by high speed switching) will create unusual pf results and are potentially high inductive loads. If the load is very low and this is all that is on the circuit its not surprising to see a low power factor.