This obsession with CT accuracy will never go away. I understand that some other energy monitors have trouble at the low end and attribute that to the CT performance. I have not observed that problem with IoTaWatt.

I believe what is meant by 0.5% accuracy is that the output is proportional to within 0.5 % of the primary current, not the maximum capacity. In the case of the AccuCT 50A, 10% of scale is 5A, so it should produce a secondary current proportional to that within 0.5%. The result, assuming your meter can scale that back up accurately should be 5A +/- 25mA.

Taking that down into uncharted waters, 1A primary should read within 5 mA. I set up a 100A lightbulb running through my Fluke true RMS meter and also an AccuCT 50A to an IoTaWatt. 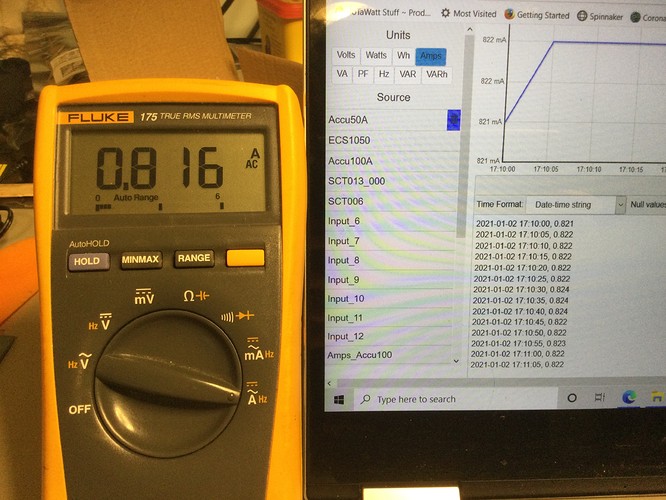 So at 816 mA primary, the AccuCT presumably produces a 816 uA signal, which the IoTaWatt reads and scales back to report around 822mA for the primary. That’s within 6mA or 0.7%. Not bad for below 1% of scale and taking into account that the Fluke meter is only spec’d at 1%.

Didn’t have a 5A load handy, but using three 100W bulbs got up to ~2.5A primary. IoTaWatt varies about 5mA from the Fluke meter, or 0.2%. I’m not claiming that as accuracy, and I don’t have a NIST standard to calibrate, but this is good equipment and I think demonstrates high integrity in both the CT and the IoTaWatt ability to accurately report the resulting output, which is in the uA range. I don’t believe you will get better results with a more accurate CT, if you can find one. 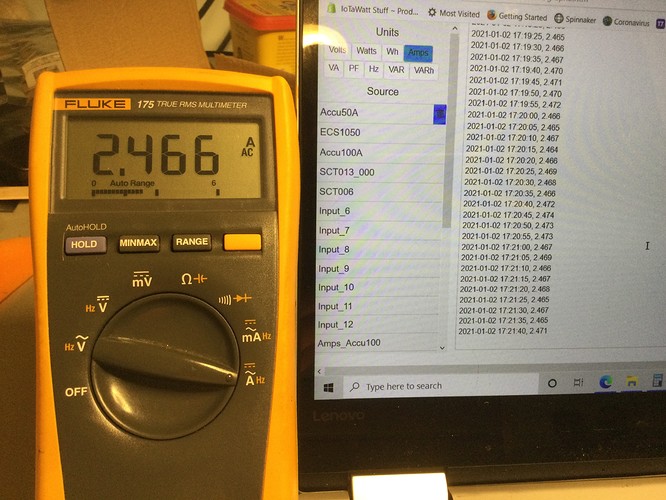 BTW/ I’ve read indictments of the SCT013 low end performance elsewhere, blaming the datasheet operational range. While not quite as good as these AccuCTs, the lowly SCT013 will still produce very good results, differing from the Fluke by about 30mA at 2.4A primary or about 1.2%, and about 8mA at 817mA primary. That’s about 1% at 1% of range. Not too shabby.

Thanks for the quick and very informative response. Data sheets can only go so far in describing how something works. Your real life examples really helped my understanding. I’ll quit looking.

I regularly use IotaWatt to see differences of a watt or so. But, you in order to do that, the usage has to be consistent. I have a circuit that is some of my measuring equipment. I recently added a micro-UPS to it. So I removed all loads except the VT (can’t make a measurement without it). The VT was using about half a watt, which makes sense. I then added the micro-UPS. I could see it charging up the battery. Since it was almost full, it didn’t take long. I could then see that the two IotaWatts plus micro-UPS were using about an extra watt over just the IotaWatts.

Now, I have another circuit that has a bunch of stuff on, in particular, my workstation computer. The computer can change its power utilization by a few hundred watts in less than a second, based on what it is doing. It is not a consistent load, but IotaWatt does a good job aggregating the data to provide information on the consumption.

I have a mix of CTs and find they all do, at least, a decent job. Also think about what you are really going to do with the data. How are you going to turn it into information that you can use to make decisions?

Found the graphs I saved from the transition. 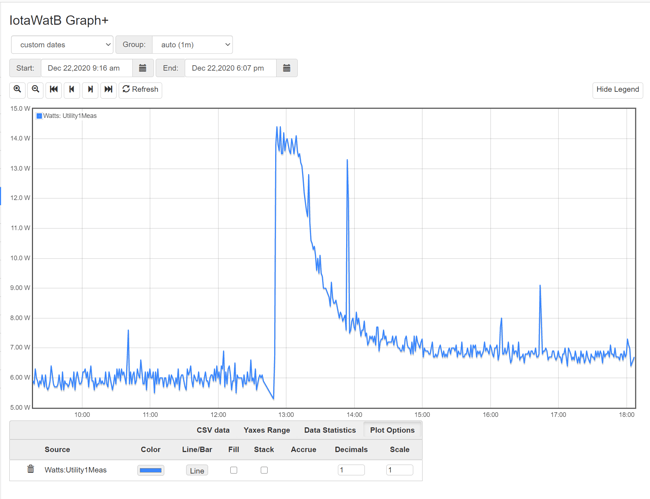 image1812×1392 240 KB
This one shows the utilization of the circuit before I made the change. It is right around 6W. There is a laptop running a bunch of home automation stuff and two IotaWatts, plus one VT on that circuit. Once the micro-UPS is charged it is drawing about an extra 1W of power. This is probably a combination of the charging circuit and the power loss of the DC-DC convertors in it. 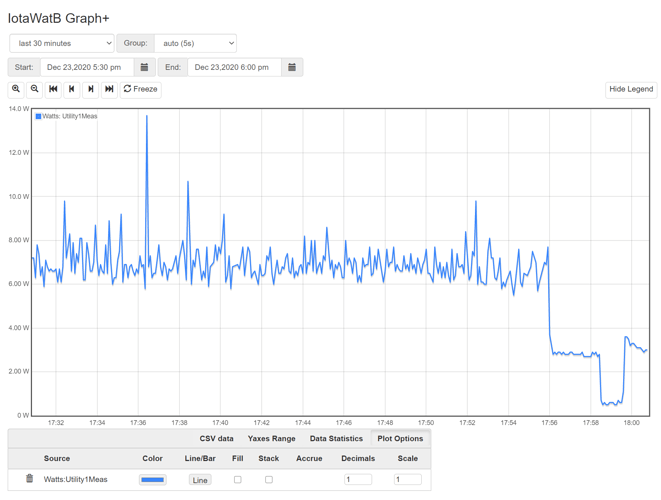 image1798×1360 253 KB
Here we have the next day. I was curious what was drawing what. I first took out the plug strip that had the computer on it. Power drops to 3W and looks very stable. This is 2 IotaWatts and 1 VT. I then pulled the power to the micro-UPS (it worked

). This left the VT, which shows at about half a Watt.

I then plugged back in the micro-UPS. It charged the batteries some, but tapered off quickly. These measurements are with the standard 50A CT. As you can see it offers great resolution of what is going on.

Here are some graphs 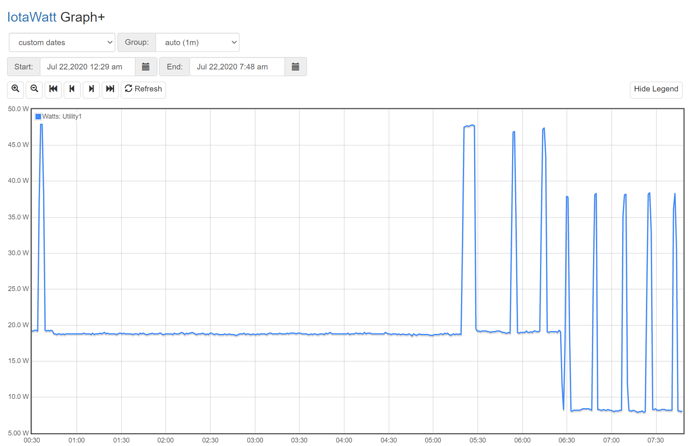 image1850×1198 191 KB
Here you can see the baseline at night is about 18.8W and in the morning it drops to 8W. The 10ishW is the landscape lights, which are on a photocell. The regularly spaced 28W loads are the recirculation pump for hot water. This is a simple circuit, so disaggregation is not too hard. 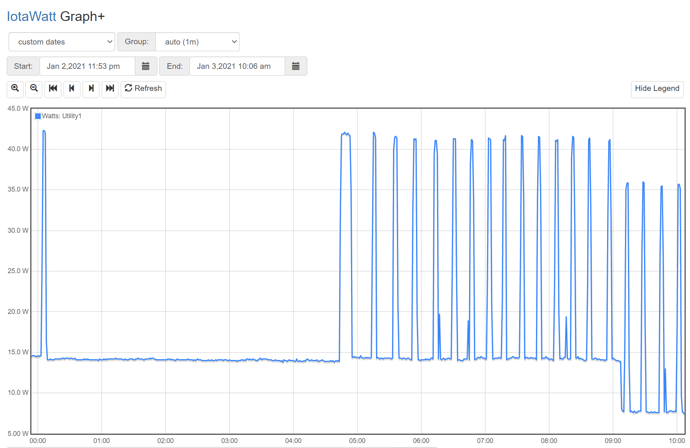 image1846×1200 232 KB
Here it is from today and you can see the night time base load has dropped to 14ish W and the day time is about 7.5. So, the landscape lights are now using less power. Sure enough 2 more have gone out and one has gotten even dimmer (the underground connections they came with are very poor and I have not replaced them all with waterproof ones).

Looking at mains circuits is MUCH harder. There is so much stuff that it can be hard to make sense of it. Figuring out what is causing base load to be high is hard. This is why IotaWatt is much better than many other choices. It has many channels and it makes it easier to find hidden phantom base loads that might not really be necessary.

Frogmore thanks for the additional information on low current tracking and the sensitivity of the CTs and IoTaWatt. Im sold on the concept! Really appreciate the real life examples.

My sons gave me a USA bundle and I have my cart ready with 10 more CTs. Im still sorting out the location of the IoTaWatt and access to WiFi. I have to either move the IoTaWatt or my WiFi router or maybe both. But that is a discussion for another thread.