Release 02_06_00 caused several units to experience failure requiring external editing of the config.txt file. Those problems have been addressed in this new release and the config app will remove some older inactive configuration elements that were associated with the problem.

The release will go to ALPHA auto-update users today.

Decided to try out this release for the influx v2 support.
The uploader says it started in the log but in the status page under uploaders its saying

Not getting any data into influx

400 is not found, so the endpoint in your URL (the URI) is not correct in your influx setup. Can you post the setup? 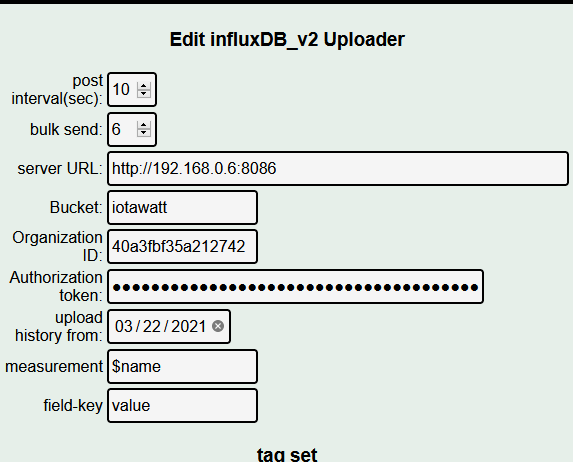 Yes, it is. I’m not in a position to look at this in depth right now, but offhand I’d say you might try adding a slash to the end of the URL.

I tried it both ways

I’ll have to admit that I have only been using the cloud version and do not have an OSS version to test with, but that’s where you ALPHAs come in. My URL for the cloud version is:
https://us-west-2-1.aws.cloud2.influxdata.com/api/v2/
I had assumed the URI was specific to the AWS server but looking at the docs for the OSS version, they use the same URI, so you might have better luck with:
http://192.168.0.6:8086/api/v2/
Give that a try. If that’s it, I’ll consider dropping it from the URL and adding it in the IoTaWatt.

ah yep thats what it was! The data is flowing now ! thanks!

Funny how I always miss the little things. I’ll look into it a bit more but probably will not require the URI in the next release.

Not a big deal I don’t think it should automatically include it but maybe a note somewhere or show the path in the default html attribute or something .

Thanks for getting influxv2 support in there!

I’ll look into it a bit more but probably will not require the URI in the next release.

A thought on a mix of this, just to put it out there. Only really applies if Influx v2 and OSS instances always default their endpoints to the /api/v2/ URL.
You could have the /api/v2/ appear as text off the end of the server URL text field, and as long as the text entered in the field doesn’t end with a slash then you append that to the end of the ip:port that is in the field.
If the URL ends in a slash, then hide the /api/v2/ from the right side of the text field and use the URL exactly as it was entered.

Might be over complicating it, but I thought it would be a nice way to support folks who are using things basically as defaults, who would benefit from the auto-appending, while providing a easy way for users who have customised their influx instance and know they’ll need to do that. The text on the right side of the text field gives a subtle but clear indication of when the URL is being appended or not that way too.
And it would still work for when the /api/v2/ is on the end of a longer URL, more than just an IP:port or domain name, but even if the base URL was something like https://domain.name/influx since leaving the slash off the end of the influx in the base URL would still append the /api/v2/

Anyway, I don’t know if that would be overkill, but I feel like it would be just smart enough to help user’s just getting into it all, while not being so “smart” that it would annoy user’s who most experienced in it all.