Per code our breakers are all AFCI which means each has both hot and neutral which means a rather tight fit (I was going to post a photo but didn’t see that option - unless ‘upload’ is it?).

In another thread @frogmore suggested possibly using the Brultech micro donut CT’s but that these may not be as accurate (and would require soldering 1/8" plugs on them which isn’t a huge issue but a bit of an extra PITA in an already overloaded schedule). They are also separate wires which can get kind of messy.

How much of an issue is the accuracy? When would it be a problem?

Other options for better accuracy and w/ 1/8" already on them? 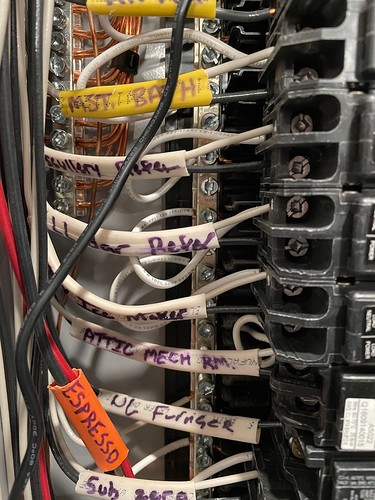 Those look like 1" breakers. That is a strange way to strip the NM(Romex) cable. It doesn’t leave much room. I would strip the white outer sheath and then there should be more than enough room for the 50A CT that is in the shop. It is a good CT with known accuracy that is very good. Having said that, many CTs have accuracy that is good enough for most purposes. I use the micro 40 CTs because I have them installed in the panel already and they work fine for my needs. The 50A ones are bigger and have bigger wires so need more conduit to exit the panel, but they are much more simple to use with IotaWatt.

Whoever wired the panel did a nice job using the cable strippings for labels, and under any other circumstances I’d say it’s very nice. Unfortunately you need to get in there. As @frogmore suggested you could just slide that “label” back a bit and clip the CTs on, but that would somewhat defeat the purpose of the labels and it would be difficult to separate the two wires as long as that label is holding both together.

But wait… Take a close look at how the neutrals are wired. There’s a jumper connecting the neutral busbar to each CT. If you get a non-metallic hook and pull those up, you could place the CTs on them very easily.

I was going to order a bunch of CT’s from Brultech but their store is quite antiquated and raises a lot of security concerns. And for the most part we no longer buy from anyone that doesn’t accept either ApplePay or PayPal.

Any thoughts on other options for a 20a or 40a small donut CT?

BTW, great idea on using the neutral pigtails. I was able to do that on a couple but others proved a bit more difficult. On those that I did the CT is pinched rather tight between the load wires and the panel cover. It works though and I’ll likely do a couple more today if I get time.

I haven’t bought anything from them in a decade, so don’t know how they are doing. They were fine, if somewhat slow, back when I ordered.

There is eBay, but you probably won’t find UL listed ones there.