Hi all, over the past year my electricity usage has been roughly 70% higher than similar time periods the previous year. Average daily usage is ~67 kWh recently which the electric company tells me is very high for a 3,100 sqft, single family home. We haven’t changed anything significantly and I’m struggling to get to the bottom of the issue.

Would you say that this product could help me pinpoint what’s going on? I’ve been monitoring some of the obvious appliances individually and haven’t found anything out of the ordinary and need to try a different approach.

Thanks in advance for your help!

My reply won’t answer your question, but I had an in-person house call by my electric company this past summer during a multi-day hot spell (southwest Michigan - upper-90s highs, mid-70s nighttime lows and dew points) as the smart meter reported to them it was running “hot” (temperature). When they pulled the meter we saw that one of the service leg connections in the meter box was severally corroded and had caused the back of the meter to melt/deform. (House was built in 1962 and still had original service “mast” - not in pipe.)

So I had a new service installed and upgraded the panel to 200 amps (from 100) this fall (took several reschedules from the utility company). So how this is related to your post is that with the new service we have dropped our monthly kwh by about 35% withOUT any noticeable change in home/occupant behavior comparing month-to-month (Nov 2020 to Nov 2021, Dec 2020 to Dec 2021, etc) bills. So, not saying you have anything like me, but thought I would mention it.

I don’t think an IoToWatt would have helped me directly since the issue was before my panel, but it (an IoToWatt) may have seen/shown where the service legs were severely unbalanced as at one point the bad leg/meter connection was air gaped and the house was running on just one leg.

I would say it could, but not that it will. All I can say is that it can help you understand where your power is going now, but that doesn’t necessarily shed any light on what’s changed.

The usual approach in your situation is to go after the suspects that have the potential to use a lot of power. If you have electric heat that’s a prime suspect. But there are other appliances that may seem like smaller users, but when they run excessively can run up a big bill.

My house is about the size of yours. I use about the same as you this time of year because I run a heat-pump from October to May (Northern New England). But I averaged 34.7 per day last year. 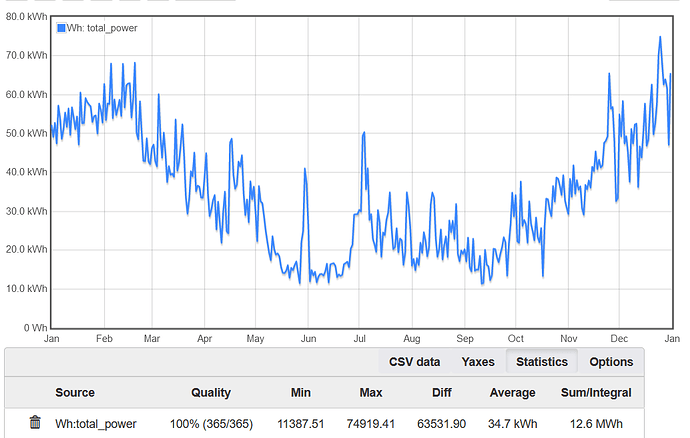 image1034×657 84.4 KB
I can break that down and remove the heat-pump and Hot Water. You can see when the family comes for 4th of July, Thanksgiving and Christmas. 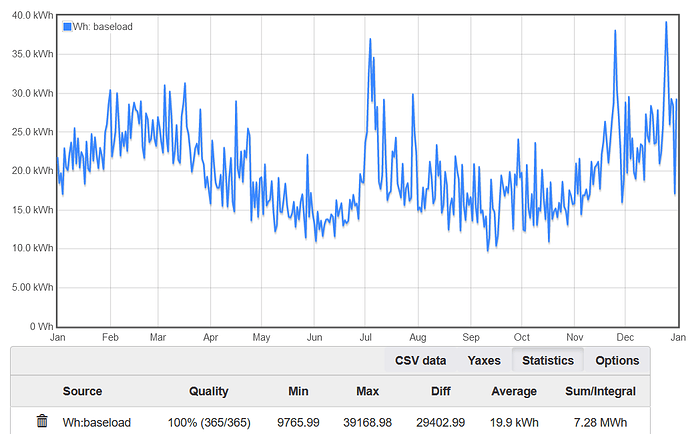 Some things that users have reported:

Some HotTubs have pumps that draw 500 Watts and can run 24/7 if controls not set correctly. That uses 12 kWh/day! Had a case where the HT was doing that and the owner thought it was the heater at 5,000 Watts. But the IoTaWatt showed the Heater only running for less than an hour with a good cover using about 4kWh/day. The pump was the culprit and the controls allowed setting it to run 4 hours/day saving 10kWh/day.

Outdoor lighting is sometimes incandescent spotlights. A couple of 150W spots will use 3 kWh in a 10 hour night. LEDs are available that can cut that by 90%.

Air Conditioning can run excessively when it’s very humid. Sometimes less is more. We run our 12,000 BTU minisplit on dehumidify only during the worst of summer. It hardly uses any power and the house is very comfortable at 76deg. You have to just keep it shut to make that work.

In short, the old saying “measured is managed” goes a long way. You never know what you will find. The advantage is that takes out the gueswork. You identify the big users and then if there is a more efficient solution, you can determine fairly accurately what the savings would be.

Thank you for the responses, I appreciate it! I think I’ll take some measurements daytime and nighttime to see if lighting could be a contributing factor. Any insight on the best way to check on the well pump?