The data sheet indicates a 2000 turns ratio (30A/15mA), although if it’s like all the other Echun CTs, they can be ordered with a different ratio - as I do with the 1050. These are the same animal. The physical dimensions are identical. With a 15mA output, it would work but would have half the resolution of an ECS1050 with 1000 turns.

Can you tell me what you are trying to accomplish by getting 15-20 amp CTs? Is it because you think may cost less, want something physically smaller, or that you think they might be more accurate?

The Echun has the ECS0625 is both smaller and cost a little less. Although specified to handle 25 Amps, they don’t really work well over 20A with IoTaWatt due to the larger value burden resistor. I have samples, have tested them, and could easily add to the configuration tables.

I realize that there is a school of thought that says that says the lower the turns ratio, the more accurate, and in a meter with 10 bit ADCs, that is probably true. IoTaWatt uses 12 bit ADCs, so it has four times the resolution of those 10 bit energy monitors. The 200A ECS24200 has the same resolution in IoTaWatt as the ECS1050 would have in one of those 10 bit monitors.

my thought process as to get something more accurate. The max current that would go through the wire would be about 10 amps. The wattage in the wire would only be between 0 -1200 watts. Its for solar. What do you recommend. I have extra ECS1050’s. I am going to extend the wire via cat5e cable like 75+ feet. I did a test with the 1050 and at 500 watts, it was off like 40-50 watts from what was coming out of the wall. at 900-1000 watts the 1050’s was only 5 watts off compared to the wall. I just thought that getting a better resolution will help with lower wattage.

I doubt both of those numbers. You might want to look at other variables and what you are using as a standard.

I have cat5e and cat6a available to use. I did a quick test for each. Tomorrow, I will write down my findings. Im using a hair drier to one of the outlets and a kill-a-watt to get the wattage and comparing it to the status of the iotawatt webpage. What 20 amp ct would you recommend?

What happens when you add an extension to a CT is that the resistance of the lead increases.

So I cannot understand how adding 3.85 Ohms makes a 10% difference in voltage across the IoTaWatt burden resistor. It would need to drop the current 10%. Remember that. The CT would need to produce 10% less current for the same primary current.

Cue an ECS0625 or SCT006. These little CTs have a power problem. That’s why they don’t perform to their basic rating with anything over a 10 Ohm burden. They can’t produce the power that is dissipated in a 20 Ohm burden. So as you move toward these little CTs, you actually create a bigger problem with the added resistance of the extension, which is trivial to the ECS1050. 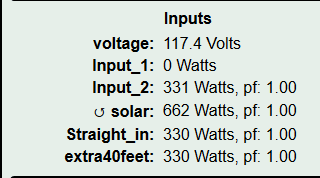 The jig is plugged into a Kill-a-watt that read 326 at the time of the screenshot.
My fluke meter was measuring current at 2.812A, times voltage of 117.4 shown that’s 330 Watts.
The load is lightbulbs so power factopr is unity as shown.

I’m pretty confident in the accuracy at low current. I unscrewed a couple of bulbs leaving just one: 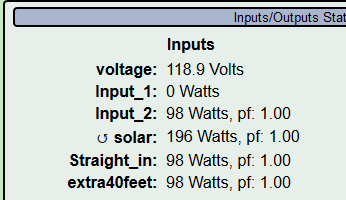 To me, these numbers are stunningly accurate and consistent.
How about if I change those two ECS1050’s to ECS16100’s?

Just as I expected.

I feel like you are correct. I think the culprit was the hair drier. On low, it seems to be doing something where it is not using electricity at full boar. On high the numbers from the iotawatt and wall were very close. I then tested light bulbs and other energy wasting items and they seem to be accurate. So its basically just the hair drier on low was the issue causing inaccurate numbers. I now have cat5e with 2 ct sensors going through it and the reading are quite accurate for what I am monitoring.

I think the culprit was the hair drier. On low, it seems to be doing something where it is not using electricity at full boar.

Some hair dryers cut off half of the AC with a diode to get the low heat. That results in an asymmetrical load, which I believe should measure OK with the IoTaWatt, possibly a little error. The error might also be in the Killowatt, or both. All bets are off when the appliance only uses half of each cycle.