Hello, I recently set up Iotawatt and have been monitoring my usage for the past month.

I have a North American split-phase install, 100amp service, with a solar inverter feeding into the panel as well.

I’m tracking a few busy circuits - dryer, electric car charger, dish washer, fridges. What i’ve noticed is that even when we’re out of town (and all lights/computers are off) we’re drawing a pretty consistent 200 watts. Seems high. I just tried shutting off all the circuits at the panel except for those i’m monitoring to find whatever is vampire-draining, and i still can’t account for the 200 watts. So, figured it was the mains CTs acting up. I put all 3 of the 100 amp CTs i have on a single main and they’re all within 30 amps of each other (not great - one is quite different, but not 200 watts different).

Any suggestions? See pics below (i’m home with some lights on, and my computer, hence “other” is reading 318 watts instead of 200. but it basically never drops much below 200). 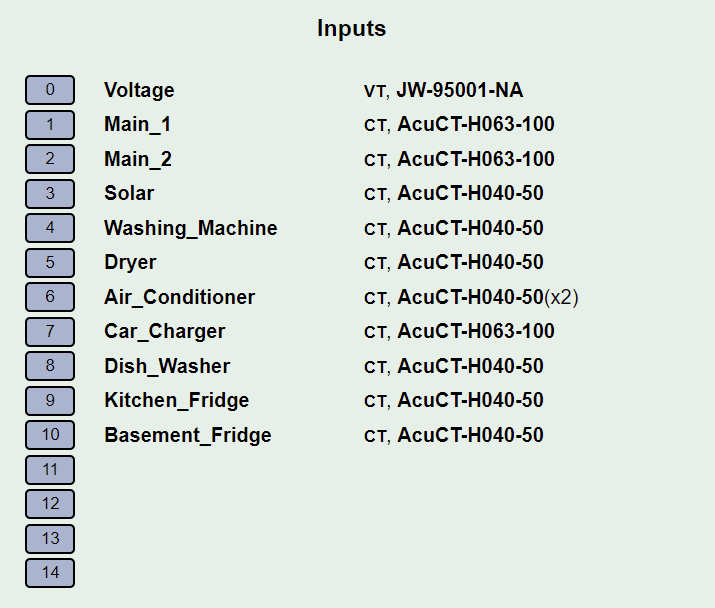 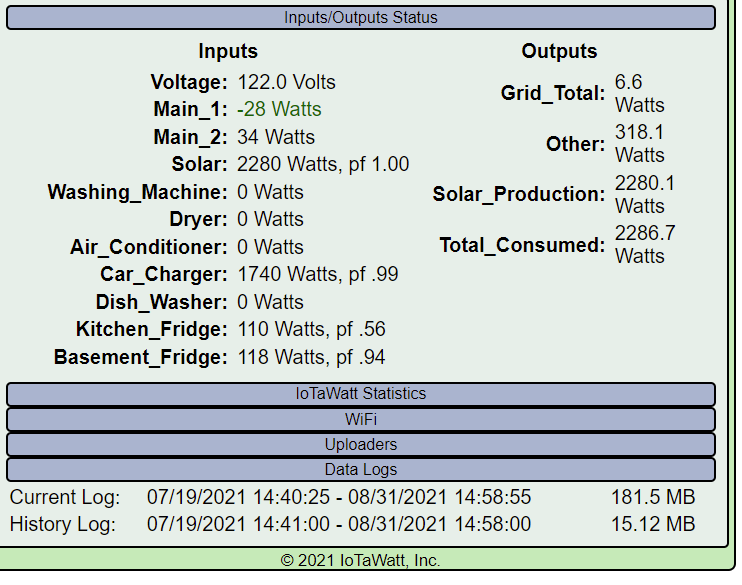 Probably @overeasy has other commentaries but I’ll share some of my experience from the last months using the IotaWatt.

It is a very trustful and reliable tool as long as you have configured it correctly, so you can trust all it’s measurements.

What is probably happening in your case is that in “Other” you are measuring all your power loses, these may be caused by a faulty electrical installation in your house, or more likely, by all the stand by power consumption of different electrical devices in your home. It may surprise you but the very fact of having one equipment plugged in may have a stand by consumption, even if it is not turned on, so a couple of watts here and there, plus the power consumption of the things you never turn off (maybe a security system or the internet router) might easily sum up to those 200 W you got there.

Yeah I thought so too, but that’s not it. I’m “drawing” close to 200 watts with almost all circuits turned off (I measure the furnace room, where my networking equipment and the Iotawatt are, with a CT and it was drawing about 25watts)

I’m looking at your configuration and wondering why Solar and Car_Charger are not doubled? These should be two-wire 240V circuits and measured with one CT on one of the wires. There are other ways to do it, and maybe you did it another way, but it needs to be clarified.

They’re 3-wire and I have both wires passed through the CT, one backwards. those numbers seem correct (the car and inverter report similar wattage).

this phantom 200 watt issue is occuring 24/7, even if the car isn’t charging and/or the solar is producing nothing.

Your mains are pretty much neutral. You are drawing a net 6 Watts. The difference between the Solar and Car_Charger, which you say you can validate, is 540 Watts. Between the two Fridges you are using 228 Watts. That leaves the 318 Watts that you show as Other.

Now the question is, if you are not using that 318 Watts, Where is it going? For this to work, it would have to go out to the grid. You would need to see some larger negative numbers on your Mains. Do you think the Mains are wrong?

I can say that rare as it is to have the mains off by hundreds of Watts, it would be highly unlikely that it would have the wrong sign. Your Main_2 is positive and would have to be negative.

Yeah I thought so too, but that’s not it. I’m “drawing” close to 200 watts with almost all circuits turned off (I measure the furnace room, where my networking equipment and the Iotawatt are, with a CT and it was drawing about 25watts)

I’d start by getting a flashlight, turn everything off except the furnace room and see if the mains and furnace room agree. If not, post that. If they do, start powering up until one of the breakers causes Other to spike.

That is not the margin of error. You have something unmeasured or not measured properly.

One thing that catches my attention is the power factor of your kitchen fridge. That’s really low for a fridge, but a reasonable power reading. Low power factor can be a sign of a CT that is not closed properly or one that has a cracked core. It would be worth switching the breaker off on that fridge to see if the mains go down by the same amount.