Greetings I’m having an issue with my 9V reference VT I just ordered/received a new VT from stuff.iotawatt.com but this is what I am getting: 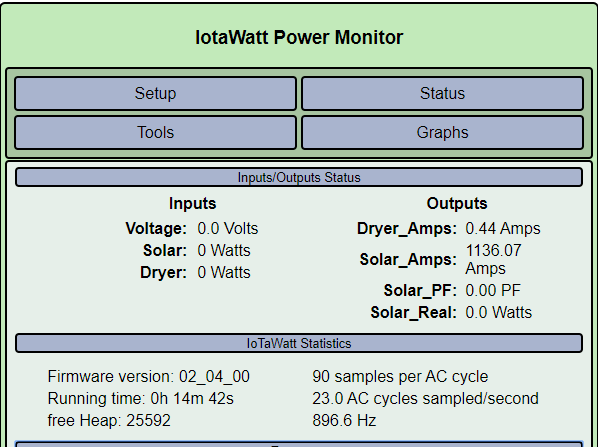 The model numbers match, I am at a loss.

It’s probably not your VT. Easy enough to tell if it puts out about 11V.

More likely it’s the VT circuit. I’ve seen a similar problem once before when the surface mount 5.5mm connector was not soldered completely.

If you are so inclined you can check that, and if so solder the loose tab.

If you bought the unit from the stuff shop, then give me the order number or other details, and I can arrange to return for repair.

If it’s a V5 unit, you can use one of the two additional three-phase VT inputs for now.

I did order it from the stuff shop, but I’ll check it the connector first, and report back when I can.

Thanks for the awesome support!

@overeasy I opened it up to check but I couldn’t tell for sure if there was a loose tab.

Let me know if you need anything else.

Thanks again for your assistance and great product.

I’ve responded in a PM to offer diagnostic/repair service.

The unit is shipping. Let me know if you need a tracking number.

I received the unit, connected a VT, and it appears to be working fine. Lets go back to square one. Are you sure that the plug the VT was using is working? Sometimes in the basement there could be a GFI in the circuit that might have tripped.

I’m reluctant to just send it back without identifying the real problem. I can see by the datalog that the VT stopped registering at 11:20pm on Sept 26. The unit was apparently powered up OK until 3:00pm Oct 1, so is the USB power supply plugged into the same duplex outlet as the VT?

I will double check the outlet it’s plugged into to see if I missed the GFCI getting tripped for whatever reason. I think the 5v USB power is plugged into the outlet next to it on it’s own circuit breaker. I’ll let you know once I verify.

I just checked the GFCI and it was tripped, the USB power is on the outlet next to the one I use for the 9V VT

I’ve since reset the GFCI.

The emoji says it all. No problem, I’ll send it back tomorrow.

Once again thanks for all the support!

I had a similar problem recently when I installed my second IoTaWatt in an outdoor Orbit Sprinkler enclosure. Before installing everything, I had the IoTaWatt plugged into a normal outlet inside my house to get it connected to WiFi, perform its initial firmware update, etc… I then moved it to the Orbit enclosure, plugged both power supplies into the Orbit’s built-in GFCI outlet, and verified everything was working fine. Fifteen minutes later, the IoTaWatt was unresponsive. I verified that the LED was out. So, I unplugged the VT (larger of the two) to get access to the GFCI reset button. I pressed the Test/Reset buttons to make sure everything was reset, saw the green LED come on, and figured all was well. I then plugged the VT back in, closed things up, and went back inside. Unfortunately, once again the IoTaWatt was unresponsive. I checked again and noticed the LED was dark.

After many iterations of the above, I finally determined that the super-cheap GFCI outlet supplied by Orbit was disconnecting (not tripping the GFCI) power to both outlets whenever I plugged in the VT. I took the outlet apart and discovered an incredibly poor mechanical design, which disconnected power due to mechanical flexing of parts when the VT was plugged in. I immediately tossed that piece of junk GFCI outlet in the trash and bought a Leviton GFCI outlet from Home Depot. Problem completely solved.

I’ve had an orbit box GFCI trip for no good reason as well. I recommend not using the GFCI, but the box is otherwise perfect for this application.

This was the first time in over a year I had run into an issue, I wish I tested the unit in my office before wasting overeasy’s time

Hmm, I have two of the Orbit boxes and both have been working fine for many years. Of course, that might be the reason. They used to use a decent GFCI outlet.

If anyone is interested, confirmed everything is working properly. Just needed to reset the GFCI outlet.