Are my CTs all dead?

I ordered a bunch of SCT013 and they just arrived. I tried using them and they don’t seem to show any readings. Am I doing something wrong? I have configured them with type CT, Model SCT013-000. They are made by yhdc, SCT013 100A:50mA, class 1.

Am I just an idiot, or are all of them defective?

Could you post screenshots of your configuration for the CTs, and your status page? Should help troubleshoot what’s gone wrong

Couldn’t hurt to have a photo of the CTs installed as well, if it’s each to get to, just in case

That seems pretty normal to me. Are Input_1 or 2 using the same type of CTs? Is their configuration any different?
And if you view one of the CT’s that aren’t working in Graph+, does it show even a tiny bit of activity? If it’s only detecting less than a watt, the status page doesn’t show anything. (My oven is always using about half a watt for the clock and timer, but the status page always shows 0. Graph+ is always good to pick it up though)

Just had another user with problems using what appeared to be counterfeit SCT013-000 from Amazon. They were simply inaccurate. The tip-off was the name was actually YHDO instead of YHDC. You seem to have a different symptom, but genuine YHDC have always been decent CTs. So I have to wonder.

Assuming you are confident that there actually is a load on those circuits, there are a few possibilities including they just don’t work, or possibly they are not wired to the correct two of the three segments of the stereo jacks.

I know for certain there’s a load on those circuits. Both those circuits go to the racks that are eating up power like pacman. lol. They will show 2 or 3 watts or so every so often, but definitely not the full amount, which is closer to 1kw or so. They don’t seem to show more than about 3watts.

Think you could get us some photos of the CTs themselves, and how they are plugged into the IoTaWatt?

Sure. Also worth noting, I have 12 of them and it doesn’t seem any work. 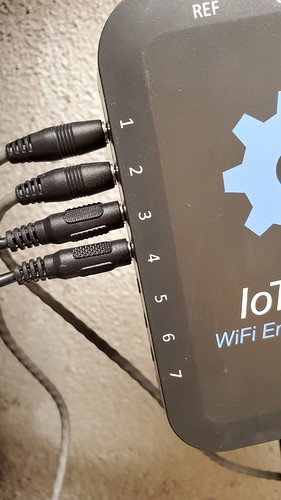 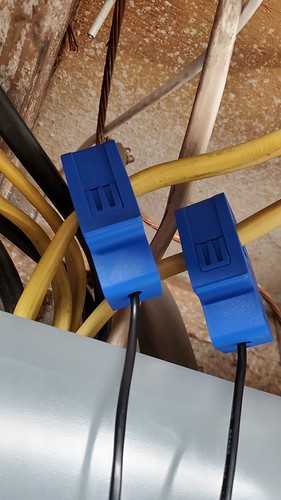 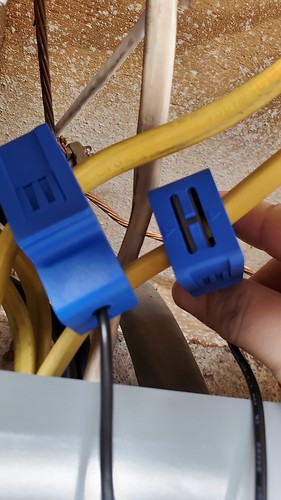 If you were in a 230V country, I’d assume those yellow wires were single conductor, but you are in the USA, and I suspect those wires are two conductor (with ground). If that’s the case, you need to find a way to put the CTs on just one of the conductors. When both pass through the CT, they cancel each other out.

Oh shit. So I need to open up the panel and put it only on the hots? I totally didn’t think about the fact that the other 2 are on the incoming hots above the main. So, turns out it was option A, I’m an idiot. Lol. I’ll try on the hots in the panel.

Thank you so much! I didn’t even think about it. I installed them now, and they work great! I can’t believe I didn’t realize that myself.

He’s just an absolute boss at spotting these things

Wish I had a tenth his smarts!