Big thanks! Pointed out utility providing me 130+V

My IoTaWatt is saving me money but not in the traditional sense. Since getting it and setting up the pvoutput uploader to monitor my solar production I’ve been “competing” with a nearby house with a similar sized system and today I noticed I was lagging behind and then all the sudden my system flatlined while the other guy was producing. I knew it was cloudy but 0 watts? So I went outside and peaked at the inverter and it had a fault light and was displaying Disturbance: VacL1-Bfr and showing 132V. I came inside and googled and that’s a fault code for the inverter saying leg1 is over or under voltage and was shutdown. So I came in and brought up the voltage graph on the iotawatt and boom, it’s showing 129+ volts. I called the power company and they put me on the schedule. A guy came out a little bit ago and verified we were still at over 129 on both legs and he called someone else to “open up some caps” and they got it back within spec. The guy told me that +/- 6V is what they are legally supposed to provide so now I can set up some notifications on my hubitat via the iotawatt community driver to tell me when to keep an eye on things. It looks like the inverter shut itself off @ 128.5V (just after 10am). The problem started the day before just after my system stopped producing and it was ok for a few hours in the morning but I literally would have had no idea this was happening because nothing untoward was happening in the house, even my computer UPS was showing 128V on its display but I guess it still wasn’t dirty enough to switch to battery.

So I lost some of today’s cloudy output but hopefully saved myself some more days of no power that I would have had NO idea it was even off.

Oh and the power company worker though the graphs and status display on the phone was super cool and the #s were right there with his fluke meter and he noted down what it was called.

I don’t know at the time, I didn’t bother pulling the panel cover but later that day when the worker came out he said it was 129.x on both legs, he pulled the cover at the meter and checked it there.

The next day I got a phone call from the guy that actually remediated the issue the day before and he asked me to email him a couple more graphs from the iotawatt to show him what was going on. He was nearby testing things out and was trying to get more information to give to a crew to do repair the issue properly next week. 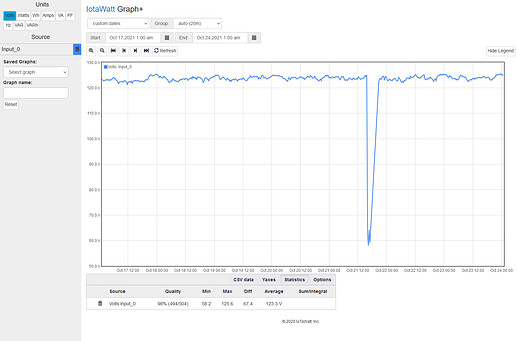 low voltage1590×1050 169 KB
It was reallly weird, I only noticed because the ceiling fans were going really slow and any incandescent lights were very dim, though the LED bulbs were fine.