I have 3 different installations with similar issue (I assume it is an issue). There should be some consumption on the Ventilation, AmericanRefrigerator and the WashingMachine, but instead I only see mWatt range ripple.

Does this indicate defect CT or defect base module ports?

I hope the community (or perhaps Bob himself @overeasy) knows what I did wrong ;o). 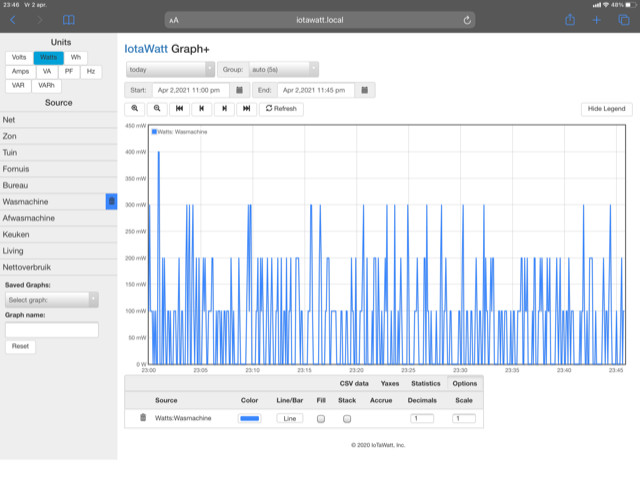 Not much to go on here. Offhand I would think that the washing-machine and ventilator simply might not have been running during the graphed period (what you see is normal background noise that doesn’t amount to even one Wh over a day). I’m assuming you have the refrigerator running, so that might be a problem.

Can you show a picture of the installed CTs, the inputs display and the status display?

The system picture I took yesterday, with CT’s, is not a very good one, so this won’t help.
It’s installed at a customer’s site, so I can’t take a better picture now. 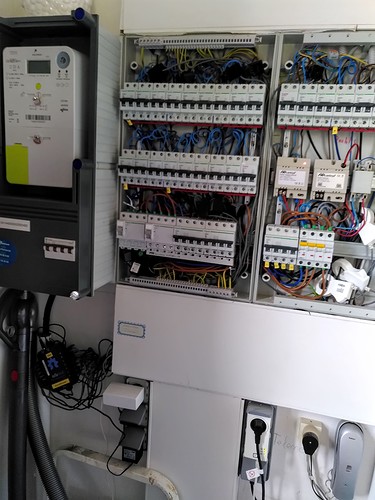 For the refrigerator, without any reason, nothing changed, this noon the CT started to report 50W consumption. I add here the inputs display, the status display and the graph.

Question: Do you have reports of malfunctioning CT’s? I am awaiting a delivery of 100 extra CT’s, do I really need to test them all on arrival? 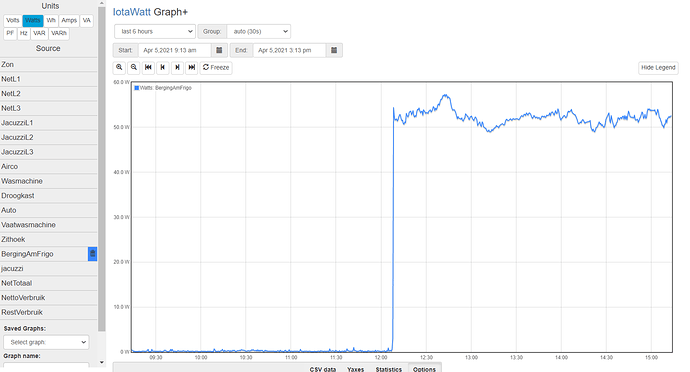 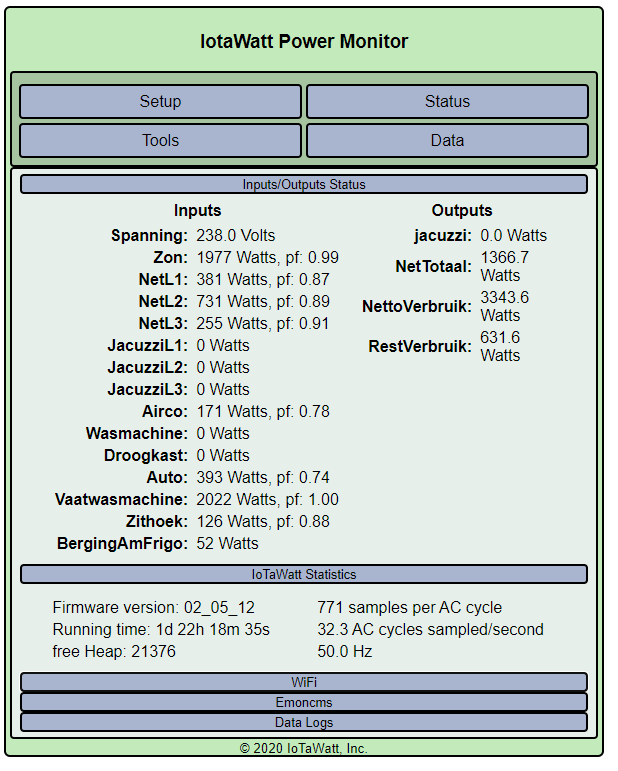 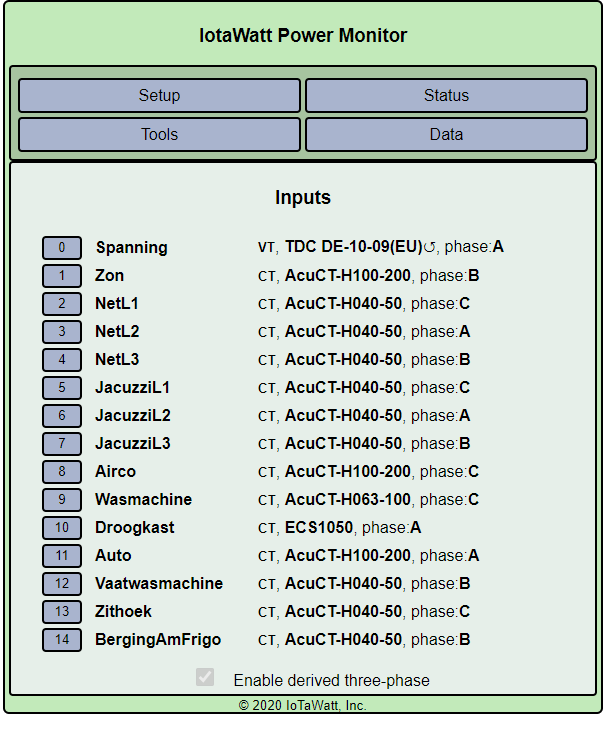 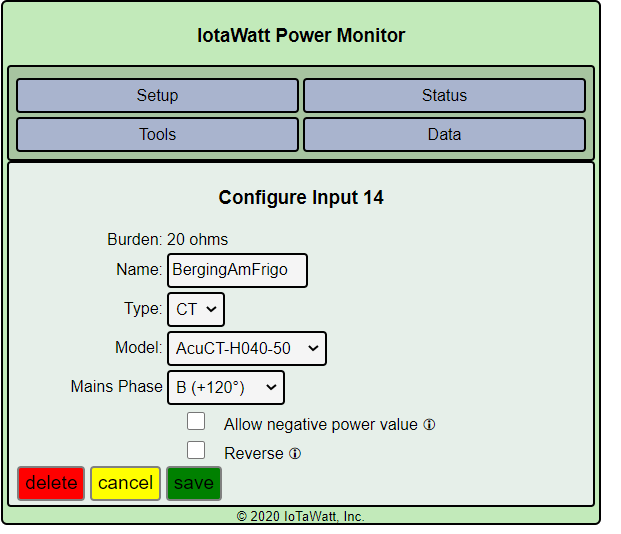 For the refrigerator, without any reason, nothing changed, this noon the CT started to report 50W consumption. I add here the inputs display, the status display and the graph.

I put defective CT pretty far down the list of possibilities here. This appliance is described as a refrigerator. As you say, the graph shows it starting at about noon and running continuously for 3+ hours. This isn’t characteristic of most refrigerators. They typically run for some fraction of an hour at fairly constant intervals of 1-2 hours, something like this:

So in your case, the fridge was off for about 3 hours, then began running for the next three hours. Would be interested in seeing that circuit plotted over the last week. It might reveal an unusual duty cycle. Either it has a very long duty cycle at long intervals (very efficient) or it was somehow switched off and is now running a long time to pull down. So it could indicate a very efficient unit that is rarely opened, a defective control, or the user had it turned off or plugged into a different circuit.
Lets look at a one week plot to get more information.

Do you have reports of malfunctioning CT’s?

No, that’s very rare. Out of tens of thousands, only a dozen or so problems and none that were intermittent. They either work or they don’t. This doesn’t appear to be a CT problem.

The installed picture isn’t necessary now. The usual problem with appliances reading zero is that the customer has clamped the CT around the line cord containing both conductors. That doesn’t appear to be the case here. Let’s follow up with the longer view in Graph+.

Thanks for following up. I installed it myself Saturday (3 days ago) and found it strange that this circuit was not reporting consumption, although I tested the circuit to be sure it had the fridge included. The fridge turned off as soon as I flipped the circuit breaker, and it was working, so should have reported some consumption the first days. Only today it started to report this continuous load of 50W… indeed not what I would expect from a refrigerator… 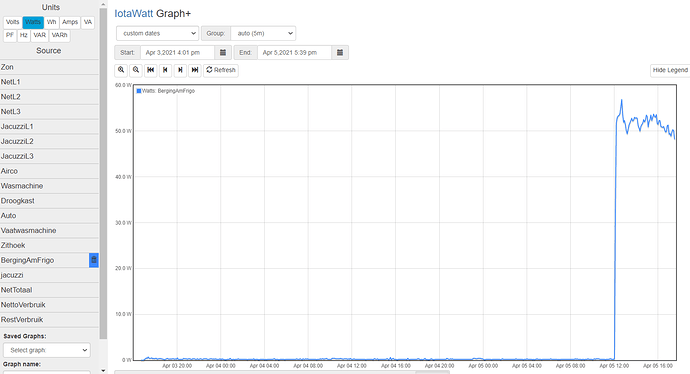 Occam’s Razor dictates that you double check that circuit is indeed the refrigerator.