Hi. I think I want something like this project. I’m in the UK.
I was using my clamp-type multimeter just before to observe mains usage in the house, since moving in last month and electric bill being 2.5x what I would expect.

I’m stuck on one thing though…

I was using my clamp on the live feed from the main fuse. Am I correct in thinking the clamps only work if they are on the live only or neutral only, i.e. one leg of each circuit? If that’s the case, how to I connect clamps around all the circuits from my consumer unit that run off to the various circuits, unless I split open the twin-and-earth cables so that I can clamp around the live only ?

or are there differing types of clamps?

You do need to clamp only one conductor (hot or neutral) for each branch circuit. Typically, the leads are exposed at the circuit breakers, but I have no direct experience with a UK consumer unit, just pictures and working with users.

When you take off the cover of your distribution board (with the power off!!!) you will find the cables inside are already split. Line goes to the circuit breaker, the neutral and earths are terminated in (different) connection blocks.

Watch John Ward on you tube for the basics.

Adding CTs to the line connections is easy if there is enough space in the box. Impossible if not.

Getting the CT cables into the DB so they connect to the iotawatt might be the hardest part - the hole in the carcass of the DB has to be safe under the UK regulations.

Shipping from the states was easy, but expect a delay after it lands in the uk as the import agent has to collect VAT before the goods are delivered.

Thanks Phil and Bob.
Yes that did occur to me after posting. I fitted a small CU to the garage at my old house so should have remembered.

Funnily enough I think there is already a small hole in the top right of my main (first) CU. It’s the slightly older plastic one (current regs say that they have to be metal I think). That hole looks large enough to feed the cables out of.

My only issue now is that I have 3 consumer units. Bob, the CU is basically just din-rail mounted circuit breakers and RCDs in a plastic enclosure.

I have 3 of them though which leaves me in a predicament with what device to use. I want the large number of inputs of the Iotawatt for the main CU, which has approx. 7 circuits coming off it, plus the main feed in off the 100A fuse, but then there is another CU in the utility room that has another 7 or so circuits coming off it. Then there’s a small one in the garage, which I would like to monitor because that runs off to some stables and various bits of outdoor or shed lighting that might accidentally get left on.

It seems like my scenario is an ideal one for that other UK-made product, with the separate TX and Base etc, but they have too few inputs on them.

I suppose I could start with just 2x iotawatts in the house, feeding their stats to emoncms running on one of these mini-PCs I have sat in the drawer (Intel NUC, Gigabyte BRIX). The feed to the garage could just be monitored in-full rather than per-circuit in the garage. It should be at zero most of the time… so that would be a good enough indication.

I love the clear signs of attention to detail… in that the ‘date of next inspection’ should say 2020.
My girlfriend’s boiler installation certificate also had a date that was 10-years wrong on it. 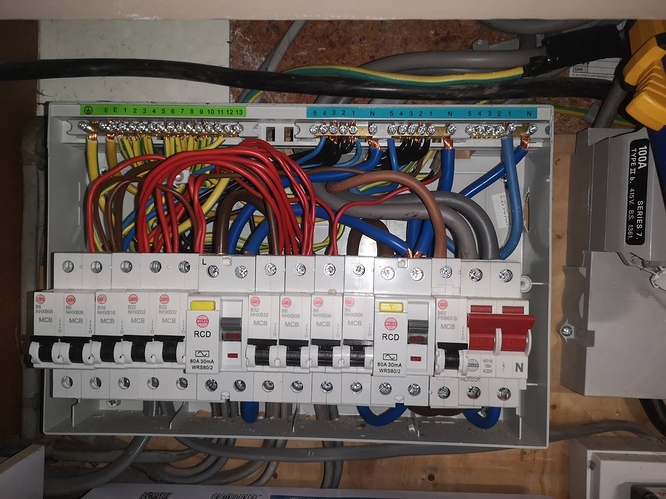 It will be tight, but the individual conductors are exposed. You may want to consider grouping a few lighting circuits together as in this led world they don’t amount to much. You can also monitor each RCD group and s pacific other loads, then create IoTaWatt outputs to compute the unmonitored in each RCD group.

Thanks. There’s even a plug socket there already to the right, which is handy.

I’m close to pushing the button on 1x iotawatt and a load of CTs. I just can’t help but think it would be useful to have one on the other consumer unit in the utility room though. This feeds to two sets of downlights and some extension-room sockets, the oil-fired-boiler, the hob, cooker.

but then I am getting into a big chunk of money, and I really want to get myself another bass guitar soon.

So if I just have one iotawatt on the ‘main’ CU, I will just get a single reading for everything in the extension-mains CU below. 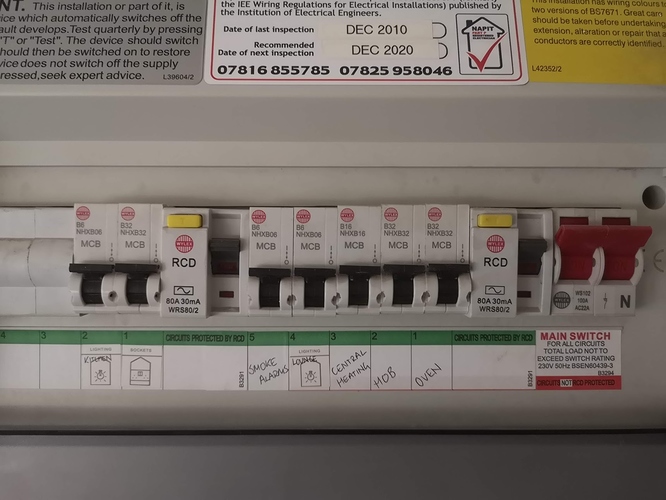 Maybe Santa-Clause will bring you that Bass.

I’ll dip my toe in with a single unit for now.
I’m sort of half wondering if I could just run a couple of CTs with very long cables over the ceilings. hmm.

I’ve tested regular headphone extensions up to 25 feet, and others have reported success up to 50 feet. Your mileage may vary.

I currently have two IotaWatts, but I started a long time ago with another device that had far fewer inputs (2 mains and 5 other circuits). 2 inputs is definitely NOT enough to figure out things, unless you want to put a LOT of time in to it. Having said that, a lot of circuits are fairly boring and some are difficult to figure out even when singled out. In my kitchen I have a circuit that has the refrigerator and some of the small appliances on it. I didn’t specify that the refrigerator should be on its own circuit, so it isn’t. Luckily, I was able to place the microwave and the toaster oven on different ones so I have never tripped a breaker (also rarely use them both at the same time). Looking at the graphs it is pretty easy to tell the microwave from the toaster oven.

I have more circuits that I think I want to monitor to see what they look like. I am probably going to remove some stuff that I am monitoring now and replace it by some other circuits that I really don’t know what they are doing. I have identified all the major loads and generally have them on individual circuits, but I have a base load of at least 200 watts and I really don’t know what all is driving that. I did just get a UPS for my work computer and it is at least 30-40W plus the load it is serving. Over time, that will cost more that I paid for the UPS.