Still trying to figure all of this out

Fairly easy setup, I think. Hopefully nothing looks wrong there. Now - when I look over the graph+, it doesn’t look right at all: 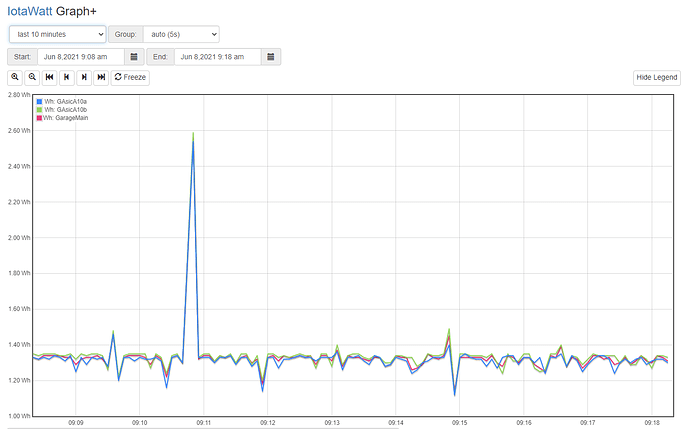 That is an image of the (2) 240VAC channels (blue/green) and the 100A main (magenta). If both 240VAC were pulling in near the same values, then wouldn’t the main be double that? I would expect the main to at least be trending near 3.0 Wh.

Additionally, I have a Smart Plug on one of the 120 VAC plugs which shows 915-925W consistently in the phone app. But IotaWatt also says it is about 1.3 Wh (which is eerily similar to what the 240’s and the main are reading).

Any thoughts on what I screwed up here?

You are plotting Wh (Watt-hours) used in 5 second intervals. Try creating a new graph and selecting (the default) Watts for units, then select these inputs.

Looks similar to me: 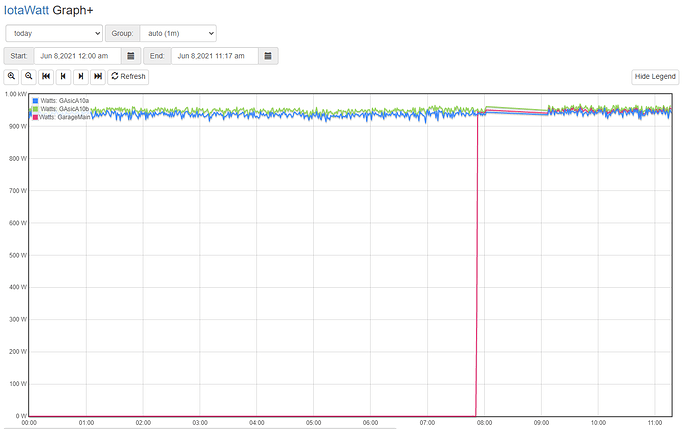 Maybe I’m not understanding this tool?

Can you post the status display with the data logs tab expended and the above plot including the time the status was captured ?

Here is the Status display with data logs:

Here is the same plot refreshed/captured just after I captured the image above: 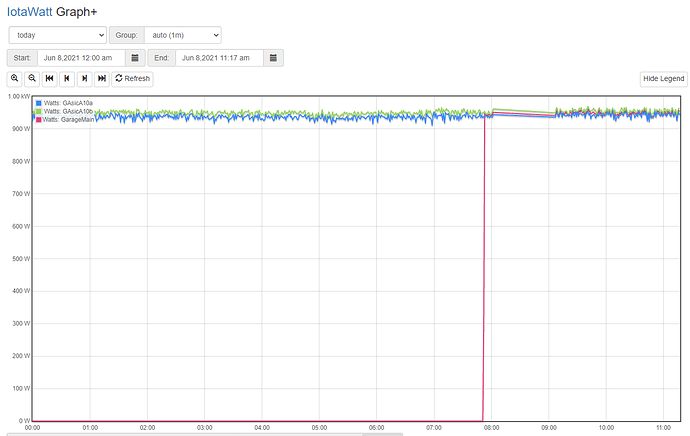 From what I can see here, the graph is accurately showing what is being measured as evidenced in the real-time status. You seem to be questioning the accuracy of those values, so let’s break it down.

Your AC units have a spec of 1,350W. Is it a fixed speed compressor, or something like a mini-split? Single speed compressors are getting pretty rare. Two-speed is common and inverter variable speed are common with mini-splits and other units. If you have something like that, 1,350 would be the maximum, but it could be operating ata modulated speed, using 958 and 972 would not be unusual.

You haven’t explained what the garage main is. By your question it sounds like it’s supposed to be the total used by that panel that has the other circuits. If that’s the case, you would need to have a CT on both lines and add them for the total to the panel.

The 120VAC and the (2) 240VAC are computers with heavy duty power supplies. Due to the way they are being used and due to the heat of the garage, the fans are running top speed. This should put them at around 950W, 1350W, and 1350W. It is certainly possible that they are running with a lower wattage, I suppose. I just was not expecting that much lower unless the temperature were < 70F at which time the fans would slow down.

Here is where I have each of the CTs placed: 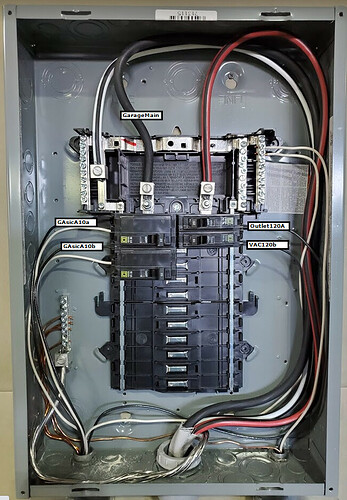 So, it sounds like I need to put on another CT on the RED with black stripe wire.

For the 240VAC lines, do I have them correctly placed since I am using ‘Double’?

So, it sounds like I need to put on another CT on the RED with black stripe wire.

That would allow you to reconcile the parts vts the whole. Since you have all of the individual loads measured, you can see the total by creating an output