I’m still using a manual timer clock to divert solar power to my hot water. Obviously there are times when solar production is low and I’m using power from the grid.

What are other people doing?

My new heat pump hot water system will have its own timer. I will program it to only allow heating during the middle of the day (11am to 3pm) which corresponds to our Time Of Use off-peak (cheaper) tariff. If the sun is shining during this time & the hot water is below the heating set-point then the water will be heated along with power to other behind-the-meter devices, otherwise the excess power is exported to the grid. 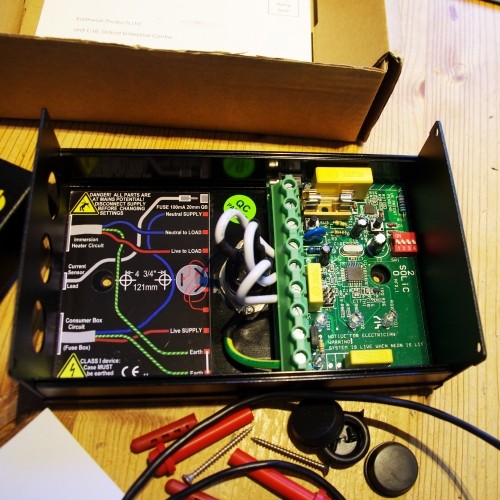 I can’t see why an iotawatt couldn’t control a hot water relay, even allowing for a manual override.

@overeasy - what do you think?

I think something like that should have its own controls, and the IoTaWatt would only be used (as is) to validate whether it is working properly and to measure any savings.

Hmm, or the other way round - something could use iotawatt data to work out when to turn relay on and off.

My understanding of those devices is that they vary the power into a resistive load, typically with a triac. So the control logic needs to be quantitative rather than qualitative. With their own control, they can regulate at very fine granularity, even per cycle, whereas using data from something like IoTaWatt would be coarser.

That said, my understanding of the OPENevse EV charger is that it responds to surplus energy data from an MQTT broker to adjust charge levels to a surplus energy metric.

The good news is that it’s all open, so anyone so inclined can add their own process to the firmware to do whatever strikes their fancy.

A heat pump is not compatible with solar diverters that send a fractional amount of the required power to run the inverter. My Sanden heat pump consumes ~850W while running its heat cycle, and I’ve configured it via relay controlled by the Fronius inverter and “smart meter” to:

The Fronius “smart meter” simply controls a simple relay/contactor to switch on and off. I imagine that IoTaWatt could probably control such a device without too much difficulty, but may require some hardware changes and therefore expensive re-testing.

But I would hesitate to have the operation of a critical utility like hot water to a DIY system that is not fully hard wired into the household electical system. E.g. it’s powered by two power adapters in a GPO and relies on WiFi). I’m happy to use IoTaWatt to confirm that my setup is working as intended.

This setup is pretty much the same thing as just setting the built-in timer to run from ~9:30AM-2:30PM in that it will run for exactly 5 hours every day, except that on excellent solar days it will turn on early to generate additional power that would otherwise be lost to the export limitation. If you don’t already have a device (e.g. Fronius inverter and “smart monitor” was required for the export limitation) then it’s probably not worth purchasing the hardware to do this. Just use the built in timer based on typical solar production.

A solar diverter with a conventional electric hot water system (with a heating element) can send less power to the element than it is rated for. It’ll take longer to heat the tank, but you won’t have to wait until you have enough excess energy to fully power the element. Unfortunately these devices (at least here in Australia) are expensive, and the savings do not justify the additional expense. And if your system is big enough and you have a small element, you’ll probably be generating enough power to run the element at full capacity most of the time, anyway.

Some people recommend running conventional electric hot water systems with solar because they are more reliable than heat pumps, and because they are cheaper to buy and work with solar diverters. But once you buy the system and a diverter, the savings over heat pump is not that great, and even though you can probably power it fully from solar power, in my case all that power would have otherwise earned a decent return (21c per kWh) if exported to the grid.

So for me it was a much quicker ROI to buy a more expensive heat pump (and Sanden have a reputation for reliability and the longest warranty here in Australia) that will be very cheap to run even on rainy days and allow me to export more power on sunny days. It typically only runs the heating cycle for 2.5 hours per day, so 2.5h * .85kWh * $0.21 (lost solar export) * 365d = $162 per annum. On days where I am export limited (most days) it’s even better because that power would have otherwise been lost. On rainy days, if I have to export some power from the grid it’s $0.31 per kWh.

I think a similar sized conventional hot water system would use about 10kWh per day. To maximise solar usage without an expensive solar diverter you’d have to use a small element which means a long running time (but same energy). 10kWh * $0.21 (lost solar export) * 365d = $766 per annum. With a bigger energy requirement (say 1.8kW), I’d probably not get as much “free” energy above the export limitation, and on rainy days the higher $0.31 per kWh is going to hurt more for 10kWh.

I think the ROI on a $4300 heat pump was about 6 years (our old gas instantaneous heater cost us $810 per annum). The ROI on an $1800 conventional electric hot water system (without solar diverter) was a crazy 40 years. The diverter would have cost an extra $1000 made very little actual difference as even the best case scenario (all solar) was so bad.