I haven’t been able to find anything in this forum regarding a double breaker with two black wires and how to handle them. I’ve read a lot of red/black double breaker and for those I have a CT on each wire.

Can I just use one CT around both (or one?) or the wires? There are no white neutrals coming from these breakers. 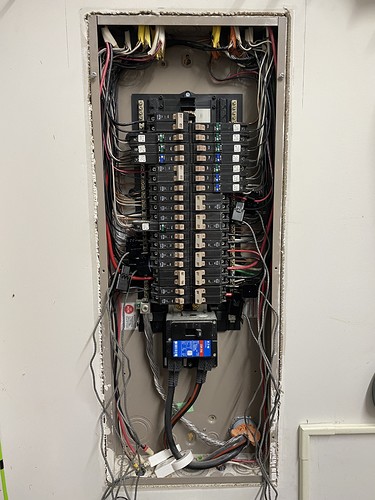 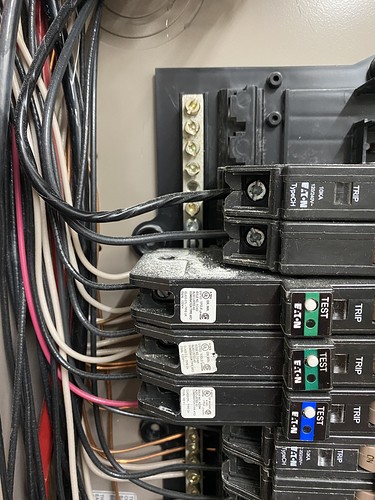 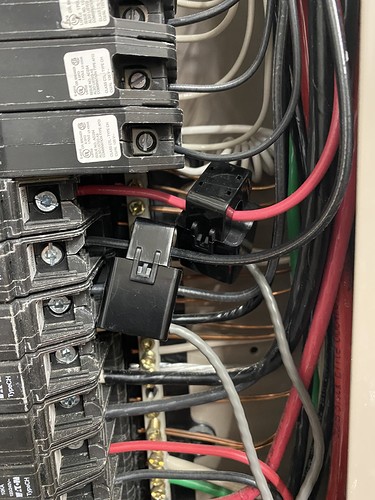 The color of the wire is a convention. I don’t believe it is mandated by code, although I’m not a licensed electrician. In general with a split-phase panel, two adjacent full size breakers are different legs of the split-phase. The question with the breaker in the top left is whether they are the two wires of a 240V circuit or two independent 120V circuits. The breaker switches are ganged, indicating they are a single 240V circuit, but the two wires are not only the same color, one appears to be a different type than the other.

In either case, it’s safe to say you can measure it with two CTs. If they do indeed go to the same 240V appliance with no neutral, which I doubt, then you can use one CT and “double”, or pass both wires through one CT with one going in the opposite direction.

I just went and looked at the labeling on the cover and they are both labeled water heater, and I only have one. I would assume that would make them 2 wires of a single 240V circuit.

Easy way to find out. Just put a ct on each, wait for water heater to work, then compare the power used on each with Graph+. If they are the same, use one with “double”.

Picture number 2 shows a close up of a double breaker with one black wire and a second (probably white) wire that has been covered in black tape to mark it as “hot”. This is likely a standard 2+Ground NM sheathed (common trade name Romex) cable. All hot wires need to be a color other than white or green. The electrician probably didn’t have any red tape that day, so used black. I don’t believe it is a requirement that the different phase/legs have different colors, but it is customary to have them be different. You should be follow the wires up to the top of the panel and see that both wires come from the same NM cable that only has two wires (plus ground), so you can use a single CT and double it.

Thanks. I’ll take a closer look!