Lately I’ve begun the process of developing an ESP32 version of IoTaWatt. I had a breadboarded ESP32 hooked up to an SD card that I used for experiments into SDMMC speed (It’s faster, but really hits it’s stride with longer transfers).

So I extended that project board by wiring it to an ESP8266less IoTaWatt. 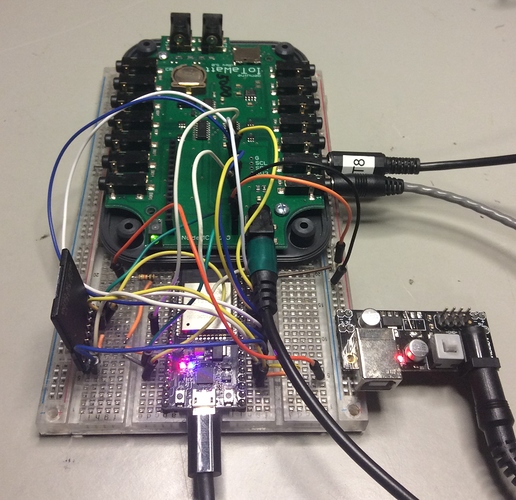 It looks like a ragtag mess cobbled together, but is actually working flawlessly. Front and center is the ESP32 DevKit. To it’s left is an SDcard adapter transformed into a microSD socket connected to the ESP’s SDMMC interface. To the right is a 3.3V supply that powers the IoTaWatt ADCs, which of course are on the standard IoTaWatt V5 board in the background.

The ESP8266 has one processor running at 80MHz. The ESP32 has two processors running at 240MHz. That’s roughly six times the raw horsepower. The V5 (ESP8266) version spends 67% of it’s time sampling power, and 33% doing everything else, like running the Webserver, uploading data and servicing queries. Sometimes that other stuff slows down sampling. Sometimes that other stuff takes a long time. Beyond the performance issues there is a general resource scarcity in the V5 that inhibits the development of new capabilities.

So the first order of business with the ESP32 was to decide the basic architecture of the firmware - in a broad sense how to use the resources. Right now, I’m using the Arduino platform that is layered on the ESP-IDF and the FreeRTOS operating system. The Arduino platform seemed a natural because the V5 uses it, but now I’m rethinking that. There are is a lot of useful functionality and control available in the ESP-IDF that is not exposed through the standard Arduino core. At least I’d like to just run Arduino on top of a custom IDF build, but really, it would be nice to lose the Arduino layer altogether.

In any event, the new environment takes advantage of the FreeRTOS environment and uses multi-threading with multiple tasks to efficiently use resources and prioritize the work.

The fundamental approach that I’ve settled on is to dedicate one processor to sampling power. That involved moving all of the existing environment to core 0, and starting a dedicated task to sample on core 1. The result is that cycles sampled is now equal to line-frequency. Where the V5 strives to sample 40 out of 60 cycles per second. The ESP32 sampler does 60 out of 60. The resulting samples are post-processed by a high priority task running on the other core. The FreeRTOS queues make it easy to synchronize the workflow into and out of the sampler as it runs flat out against line frequency.

So that took a long time to get working properly. It’s a complete rewrite of the sample code. The SPI works differently on the ESP32, so it was necessary to hack some of the HAL (hardware abstraction layer) code to get the needed speed and flexibility. The V5 does some equivalent things to utilize the wait time during SPI transfers on the ESP8266.

The V5 uses the standard synchronous ESP8266WebServer. With the ESP32, I’ve changed over to me-no-dev’s Async Web Server. The V5 was already using the AsyncTCP component for outbound client I/O in the upload servers. This WebServer went in pretty smooth, although there is a lot left to do to add authorization and all of the handlers in the V5.

The ESP32 has robust support for SNTP, so time services needed to be revamped. That touches everything, but is much more straightforward than the code in the V5 as it uses standard “c” time services with native support for timezones. More work needed there but promises global timezone and DST support.

Once the datalog started working, query support was ported in with just a few changes to the way time is handled. The result is that Graph+ is working. This is a milestone because it offers a real insight into ESP32 performance. Where a typical graph query/plot is two or three seconds on the V5, it’s usually about a second on the ESP32. The query is typically 1/2 second while the rest is the browser doing it’s javascript thing. 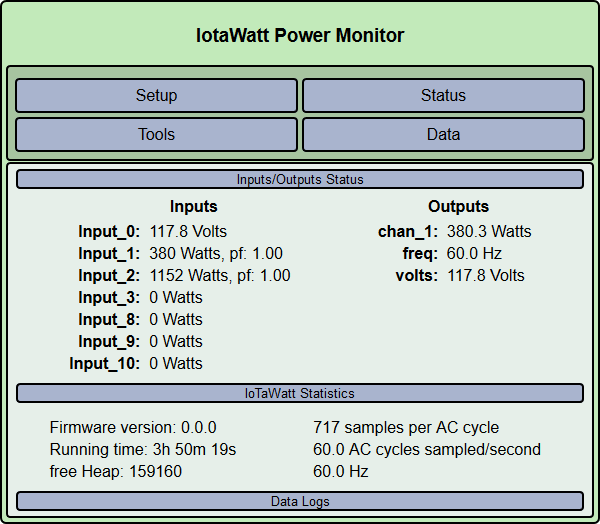 This is a long way from ready for prime-time. There’s a lot left to do, and once the ice is gone, I’ll be sailing again. Even once there is a viable unit, I’ll have to decide whether to spend the money needed to get FCC, ETL, and CE certifications.

Can’t wait to have a look on how you solve issues migrating code to ESP-IDF and finding new solutions.

I learned a lot studying iotawatt.

I would gladly upgrade to a version that increases the number of inputs measured! The ESP32 should also increase accuracy and sampling

If there is some way we could support you on the certification costs, please let us know.

Looks very promising!
I would second the increase in channels since i’m running 4 Iota’s at the moment (and losing 3 channels on each one for the VT’s).
Keep up the great work!!

ESP32 version would be great. I would totally help in writing code/utilizing the BLE functionality to communicate with phones/hubs as wifi and internet is not always available in some applications such as off-grid buildings.

I assume you’ve seen this video, might be an option?

I watched the whole video, thanks. TBH I couldn’t find anything at all useful in there. It’s a pretty crude DIY thing. Doesn’t actually measure real power (Watts - what your meter reads), it measures apparent power (VA). If that’s all you want, you should probably just get an Emporia Vue. It uses an ESP 32 and also measures VA rather than Watts (IoTaWatt measures both Watts and VA as well as VAR).

If you want an inexpensive unit to measure Watts, the emonTX is probably a better choice it’s inexpensive and requires less programming. But if what you want is a DIY project, maybe this fits the bill.

DId you make any decisions about whether to move forward with this ?

I have just purchased a V5 and am eagerly waiting for it to arrive, but would still be interested in purchasing a V6 ESP32 unit at some point.