Is anyone monitoring a hot tub?

Is anyone monitoring a hot tub? Searching the internet for kW draw isn’t very helpful. Would love to see a typical day graphed both while in use and while “idle”.

Note: I understand it can vary quite a bit by size, model, and climate. Just looking for a baseline.

I’ve always wanted a hot tub, but couldn’t justify the cost to run the thing…

That’s why I’m hoping to see some data… googling “how much electricity does a hot tub use” isn’t very helpful.

Living in the Seattle area, so this time of year 40 at night and maybe hits 60 during the day. Have a few data issues at certain times due to some issues

but this should give you a good idea. 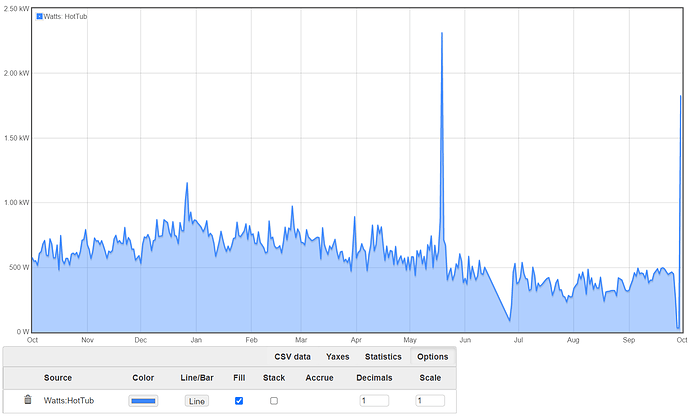 Looks like I can expect ~500w of “idle” and I assume those spikes are the jets coming on to filter it.

I’ve seen this plot before. A couple of years ago I looked a hot-tub and it showed the same thing. If you look at the Watts plot, you can see that the heater only goes on a couple of times for a very brief period. As you would expect in the reported mild climate. If the tub is well nsulated and has a floating evaporation shield on top, it wouldn’t lose that much heat.

The 24/7 500W load is probably the circulator pump. The pump has to run while the heater is on, but if the tub is lightly used as most are, a couple of hours a day of pumping for filtering is adequate. You might check the controls to see if there is a setting where the pump doesn’t run continuously. You will save 80%-90% of the energy wasted pumping while not in use.

I never understood why they use the high output pump that runs the jets to do simple filtering. A second pump that draws <100W would work fine and reduce energy use substantially.

EDIT: Misread the plot above, thought it was a plot of Watts for a day. Looking again I see that it is a plot of average, probably daily, Watts over a year. So it would be about 12 kWh/day.

That’s still consistent with the 500W 24/7 pumping that I saw in the other tub.

We have a HotSprings Grande NGX (insulated) and a hard top cover. Circ pump runs 24x7 and draws 67 watts (Uses 1 of the filters) Heater takes 15 minutes to raise 1 degree at 4kW

@crzykidd sorry for the confusion, why is this different than what you posted above?

Ahhhh, I see. The “constant 500w” graph is over months… so averages to ~500w. And the one you just posted is the actual “idle” around 60w, then spikes to 4kW when the heater kicks on.

edit: correcting the graphs and numbers - I should have stacked both CT’s so the numbers were half of what they should have been 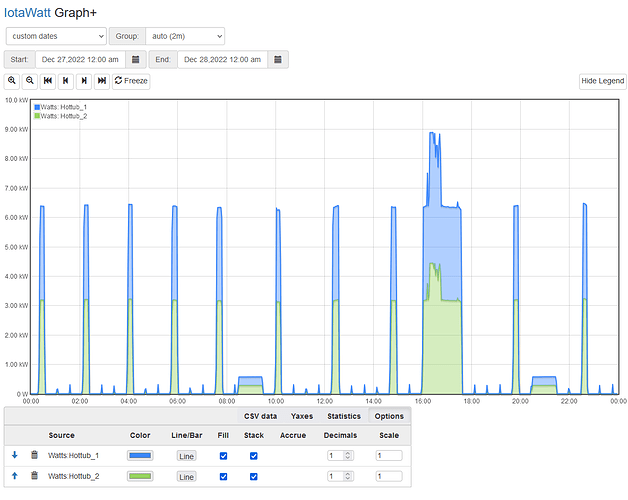 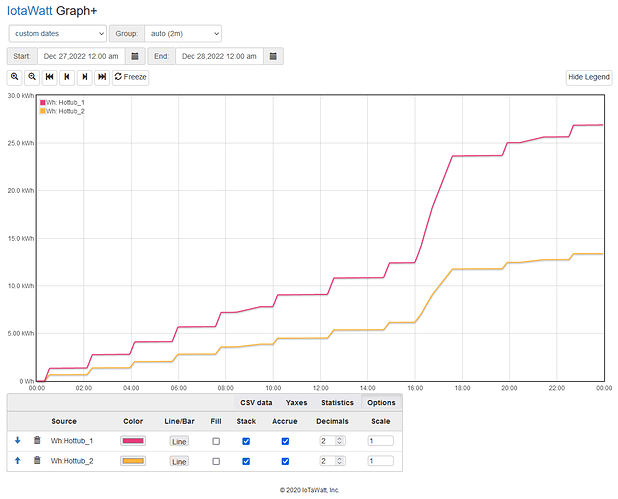 It looks like you may have a CT on each of the conductors going to the hot-tub, and they are reading nearly the same. If that is the case, then you probably have a two-wire circuit and can simply use one of the CTs and “double” it. It doesn’t matter as far as accuracy, but in the bottom plot of kWh you show the two traces each going to 13+kWh. That is actually 26+ kWh of energy. If you check the “stack” box it will show that. Similarly, the total draw with the heaters on would be about 6500W.

26+ kWh at 0 C is quite a lot. Do you have a floating evaporative suppression layer when not in use? The standard flip over cover does little to stop evaporation, which is the whole ballgame when it comes to heat loss. A floating film of small bubble wrap like material cut to fit the surface area will reduce heat (and water) loss by a lot.

Thanks for the reply @overeasy - it’s on a three wire circuit, hot/hot/neutral/ground. The ozone-ator + sound use 120v that is outputted from the spa pack - which aren’t really significant overall. Doubling up a single CT makes sense, then I could move the other CT over to something else.

Good point on the stacking of the CT’s - I should have done that. As an aside, the power usage for 240v sources over time with two CT’s for whatever reason isn’t as intuitive as it should be for me - I’ve read about it and it all makes sense (reflecting on it, 240v on it’s own makes sense, as does 120, but it’s when there’s a 120v load on a 240v appliance that things don’t add up mentally,) I’ll have to be more careful remembering to stack them (and will update the post above so it doesn’t mislead anyone.)

Yes I added a solar cover the first winter to help with the evaporation mainly to prolong the life of the cover, as it was picking up the condensing vapor and making it heavier than it should be. Makes sense that it would also help with heat loss. Looks like I have a bit of a project this spring/summer to insulate/seal it up better.