Here is a graph of what I’m seeing (the breaker is off):

And here is a close up shot of the CT in question: 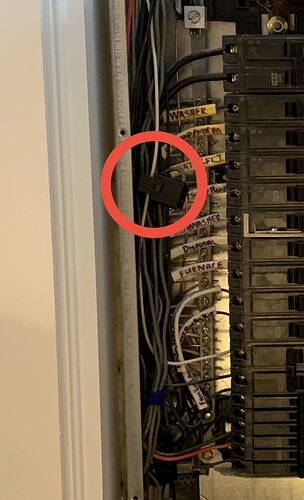 If this is normal, that’s fine. Just wanted to confirm.

The 200mW to 500mW is what I would consider normal background noise, especially on a “doubled” input.

The 40W spike is not normal. I’m curious how often that happens.

The first thing I would do is add the mains to that plot and see if there is a spike that aligns with it. If so, I’d then try plotting that with whatever circuits, especially higher power circuits, to see if it matches up with any of them. If so, you might be able to better identify the source. I’ve never seen such a large spike resulting from any internal crosstalk problem.

@overeasy , thanks for that suggestion. As you suggested, these spikes do seem to correlate to spikes when my HVAC kicks on (note that I scaled the Steam Humidifier data by 200):

And the same data, just the Steam Humidifier (breaker off): 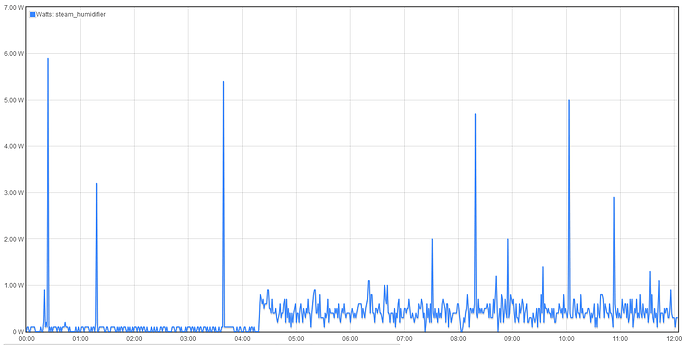 So, I definitely seem to be getting cross talk from either the other CT line, which runs right beside it, or, more likely, just noise from the power lines themselves, which is behind the bundle that the CT is sitting on.

It does look like the HVAC inrush is the cause. Is the HVAC that 40A at the top and do those cables run all the way down alongside the CT cables? My guess is that it’s caused by the CT cable running close to one or more line voltage cables. You can test that by removing the CT from the HVAC and see what happens after a couple of HVAC starts. There are a few HVAC startups in the graph that didn’t appear to do it (10:00 - 11:00) so a few would be needed to be conclusive.

Another question is what started happening at about 4:20 to cause the low level noise to increase so much?

Thanks again for the feedback. A short while ago, before you had responded, I tried moving the CT on the steam humidifier down to input 7 from input 3. The HVAC is on input 4. I still see the spikes. Just wanted to rule out the proximity of the inputs on the IoTaWatt board.

That 40A at the top left is indeed the HVAC.

I buttoned the panel back up yesterday, but I’ll try moving things around the next time I have it open. I’m going to order some more CTs for a few other circuits. I had only ordered a few the first time around because I wasn’t sure I was actually going to go through with the install. Now that I’ve done it, I’m feeling a little braver trying to cram these guys into the panel.

I’ve looked at the other inputs I’m actively monitoring and can’t really say what it is that occurs around 4:20 that causes the low level noise to elevate like that. Maybe once I’m on some other circuits it will be more clear. Not sure what would have been active at that time of morning except for the HVAC.

Here is a shot of my whole panel. Sorry about the lighting. Will try to get a better one next time. HVAC CT is top left, just to the left of the mains CT. 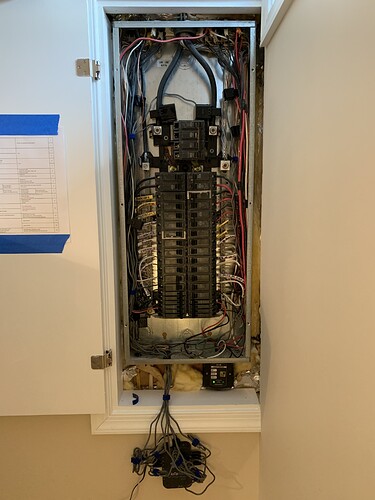 Made a few edits to my last post. More information and a full install picture including location of HVAC CT.

@overeasy , FYI, moving the Steam Humidifier from input 3 to input 7 does seem to have reduced the size of the spikes. The HVAC is on input 4.

EDIT: Hmm… actually, I’m looking at another one of my posts with the Steam Humidifier on input 3 and see that its spikes were also in this range. It was only that one erroneous data point in my first post that was up near 40W.

Well, I have some more CTs on the way from your store, so I’ll try some stuff once I have the panel off again, such as just leaving the CT hanging away from the panel to see what the noise profile looks like.

@overeasy , interestingly, this seems to be affecting other circuits as well. Here is my oven vs HVAC graph. The oven CTs are on the other side of the panel from the HVAC lines. So, the only place the CT lines would cross would be when I bring them out of the panel to the IoTaWatt. The power wires are nowhere near each other. I scaled the oven line by 150. 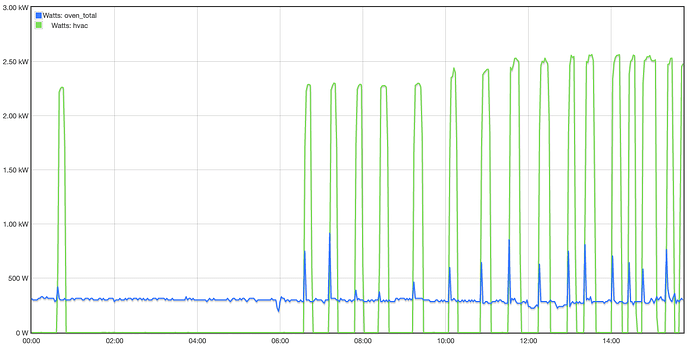 Can you plot voltage with the HVAC please? 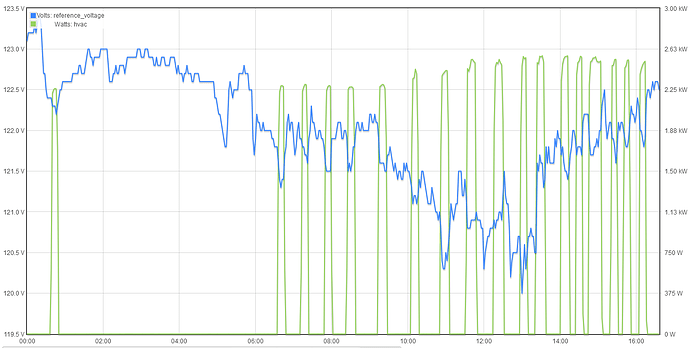 Well, I have no idea what changed. I did not remove the CT on the steam humidifier. In fact, I added 4 more circuits to my IoTaWatt. But, all the noise that I was seeing before is all but gone now.

Could it be that you are looking at Wh instead of Watts?

Ah, nuts. I was looking at my total daily usage saved graph prior to that and missed that I hadn’t changed the units back. Here is the correct graph. Still, not bad.