Precision, anything I might be able to do to increase it?

I’ve had my IotaWatt running for all of three days now and am very happy with the device.
There is one area where I’m wondering what I might be able to do about and that is the precision.
Now, I only have a single days worth of data to base this on, but it looks like results on at least one of the sensors is almost 3% off. I get the impression that others who have measured see better results than that?

I read the generation meter of the solar PV installation yesterday and today. The readings show a production today of 7.4 kWh. According to the IotaWatt, production was 7.2 kWh. The difference is less than 3%, so probably within what I can expect, but based on what others have seen I guess I was expecting the precision to be a little better?

The ECS1050 CT is more accurate than the SCT013 https://stuff.iotawatt.com/product/current-transformer-50a-split-core/

If you haven’t calibrated the VT, that’s could be contributing. It’s a simple procedure if you have access to a decent voltmeter.

Although I believe you should be OK with the SCT013 CTs, they are not the best, and oversized for this application. Most IoTaWatt users use the Echun 50A CT for small scale solar. You could put both CTs on the same active conductor for a few minutes and see if the IoTaWatt shows the same Watts.

You should be able to get within 1% of generation. There’s 1% potential error with the sample size that you have. Also, are you reading the generation directly from the IoTaWatt or from an external database?

Well, I wouldn’t say my my voltmeter is decent, but that and a kill-a-watt like thingy I have are within +/- 1 volt and the IotaWatt device was typically showing 4-5 volts less, so I’ve changed that by changing the calibration number. It is slightly difficult to do though, as the displayed volts jump around a lot. I recon that by comparing to the measured kWh I’ll also be able to confirm whether the calibration is making the monitoring more precise.

I did as suggested, put the two CTs I have on the same conductor (the one coming from the solar PVs) and they do show a difference as can be seen on the attached graph. Not quite sure what to do about it, if anything? The difference is 0.7%. 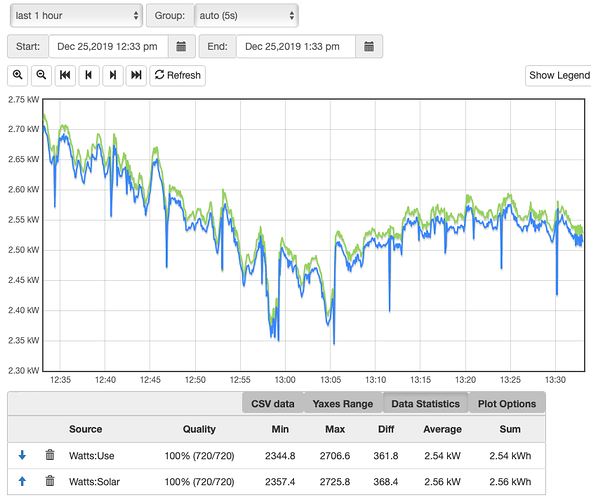 I’ve been reading the generation directly from IotaWatt, by reading what is displayed from the “Data Statistics” tab.

C[quote=“Rickenbacker, post:4, topic:1521”]
Well, I wouldn’t say my my voltmeter is decent, but that and a kill-a-watt like thingy I have are within +/- 1 volt and the IotaWatt device was typically showing 4-5 volts less, so I’ve changed that by changing the calibration number.
[/quote]

The Kill-a-Watt voltage is very accurate in my experience.

It is slightly difficult to do though, as the displayed volts jump around a lot.

1 Volt is less than 0.5%, so just tweek it until they are both jumping around the same decimals. Best if the VT is plugged into the Kill-a-Watt or on the same power strip.

In my limited observations, they have about the same linearity, but the calibration consistency seems a little better with the Echun. Your plot is with a primary of about 1A which is the bottom 1% of the range. The most significant difference between the two models in this range is the phase shift of the SCT013 is much greater and more variable. That said, IoTaWatt compensates based on primary current and I get good generally good results with the SCT013.

If your PV isn’t greater than 10kW, the 50A is preferred.

Nice to see folks playing with their new toys on Christmas