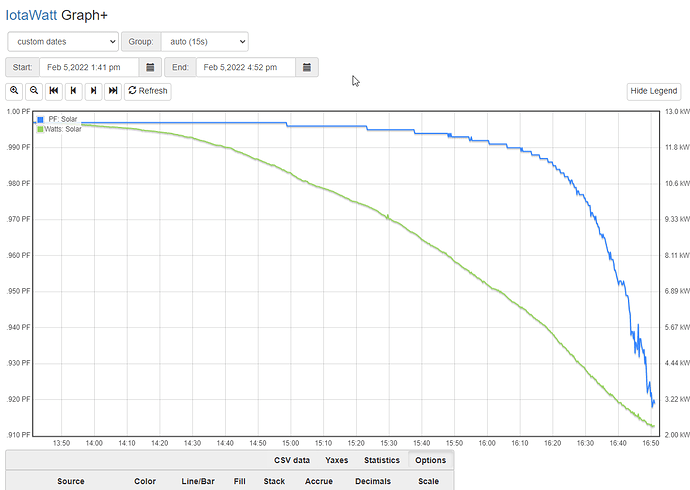 Putting it in perspective though, the power curve is 2kW - 13kW while the power factor scale is .91 - 1.00. So while it looks like PF tanks, it actually remains above .90.

It did go even lower, right now I assume its at pretty much the lowest it will go

Another thing if there are any Enphase users here, I’m seeing a constant 14-15w current now when its dark 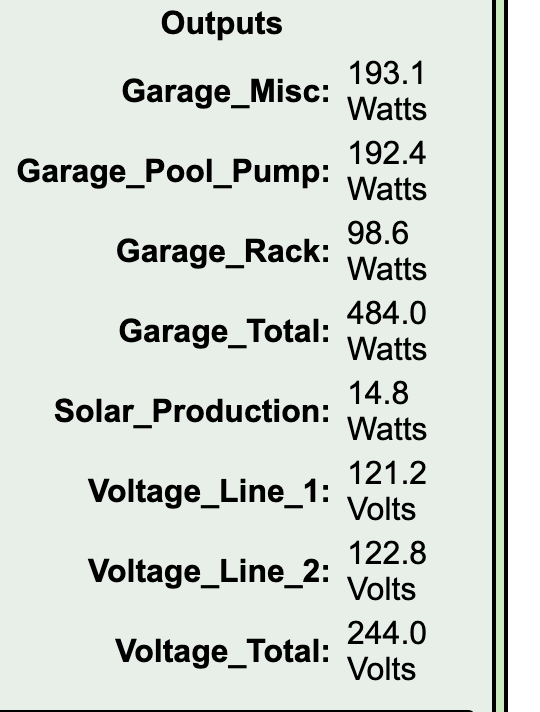 I’m wondering if that could be the Envoy drawing power? But then I’d expect it to be -15w? I have this CT on the Disconnect which is after the Combiner box. I was going to go on the circuits into the combiner, but there wasn’t enough slack to get the CT on

Only if the input has “allow negative values”.

Thanks for the info, I checked that and it still shows 15w, looks like its getting higher over time which is weird

I guess it could be moonlight and other outdoor flood lights hitting the panels? unsure how that works 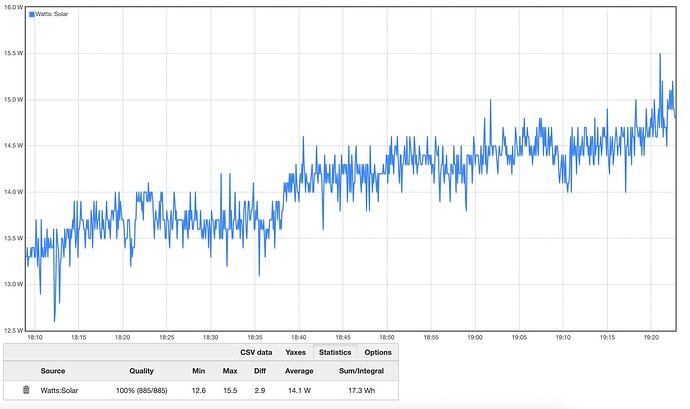 Tomorrow I might try see if I can get a CT around the 4 x solar circuits instead, that would rule out the Envoy power

Well, it goes up when I shine a flashlight on it, so I think this 14w is really just production, unless I’m just going crazy

EDIT: I’m crazy, that was a coincidence

Any way to set anything below 20w as showing zero? It would help with some charts I’m making

I’m seeing spikes of 3-4w on my Generac Generator line too, which currently has zero current on it (The generator is off, and the ATS is not in position, so its impossible)

To add, I have another weird issue. My solar is a line side tap, so it comes in right after the meter before It gets to my Generac ATS or main panel. So I can switch to generator and not affect the solar at all

If I switch to Generator, it completely bamboozles the reading on the solar 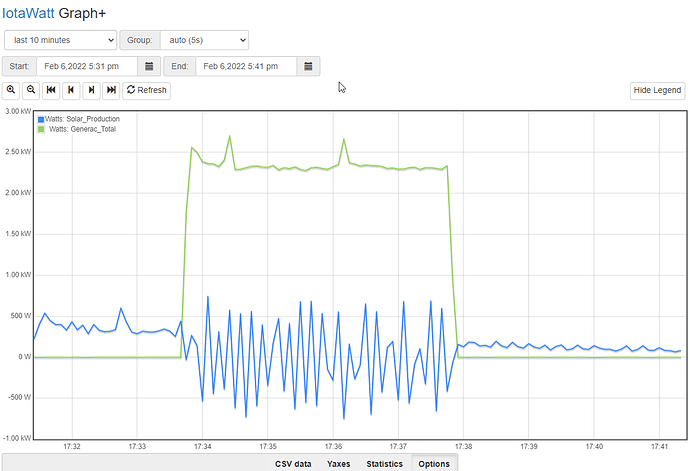 At some points it shows -600 Watts 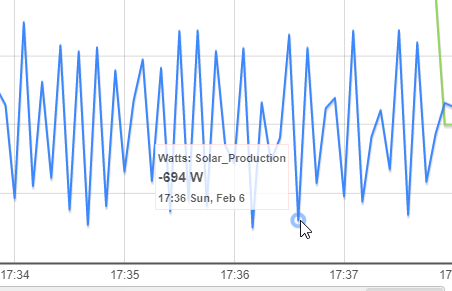 Voltage at this point stays about normal 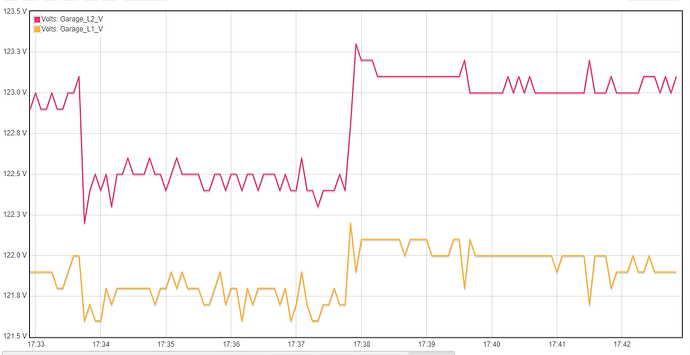 Anyone got any ideas here? Could it be because the frequency is completely out of sync?

Another screenshot showing usage too 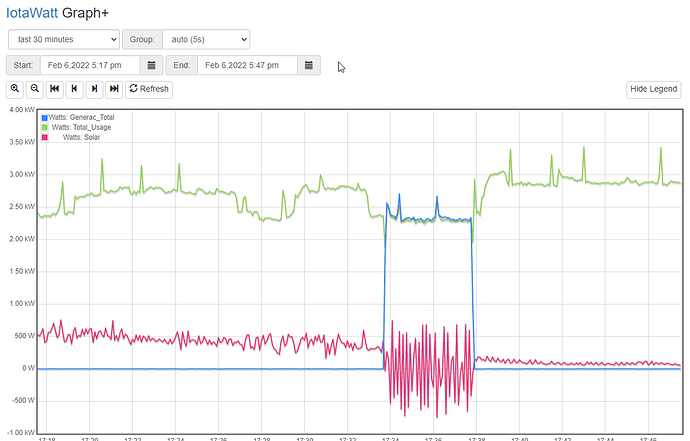 Anyone got any ideas here? Could it be because the frequency is completely out of sync?

If I understand what you are doing, the solar is connected to the mains, which are active, while the VT and other CTs are connected to a generator. Those are two independent power systems, so if you want to measure both, you will need a voltage reference on each. You can do that with IoTaWatt as it has the capability to accept up to three VTs.

Thanks, I’ll grab another and ditch an input. I can throw it on the same circuit as the Envoy. There’s not a 240v VT is there?

Since I’m planning to re-do the solar anyway, is it better I use 2 CT’s vs 1? Just looking for the most accurate reading and to get rid of this constant 15w current at night

The plot of power was interesting. You can see that the frequency of the two power systems was slightly different and when they were in phase power went positive but when they drifted out of phase it went negative. It happened about six times per minute, so I think that’s about 0.1 Hz difference. Pretty good actually, is it an inverter generator?

The generator is not an inverter generator, but it’s a pretty good Generator. It’s a Generac RG027 which is an 1800RPM 27kw Generator with a 2.4l Mitsubishi engine

Yep, you’re right, the VA does look in line with before and after. Its a bit all over the place like watts, but perhaps thats just how the solar is when it gets to lower power? Unsure 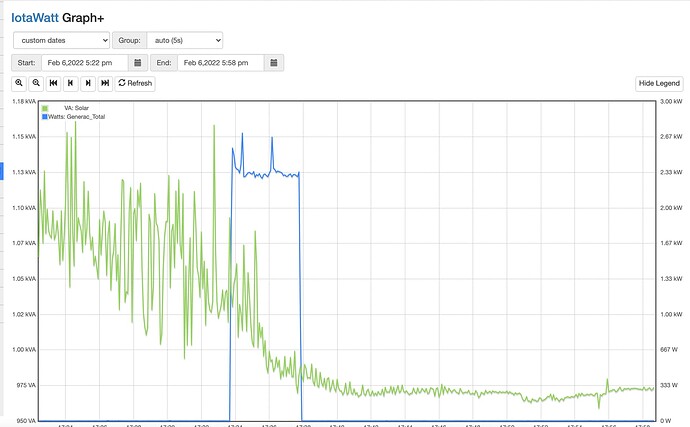 Interestingly, the VA looks wildly inaccurate though. Any ideas on that? This is when I’m on grid power so its not the generator bamboozling it 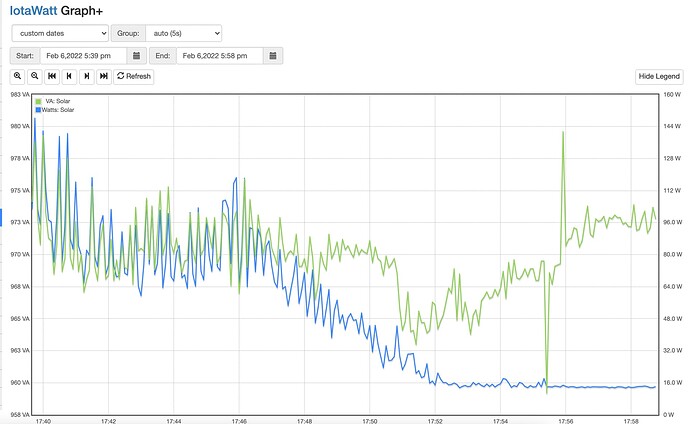 Here’s a video of the Generator. I love it