I have installed the IotaWatt monitor on a three-phase system (star connection).

I cannot get the right values. I use a single VT and I have activated the derived three-phase.

I have checked that the right input is linked to the right phase.

Thanks for your support.

Here is the inputs configuration: 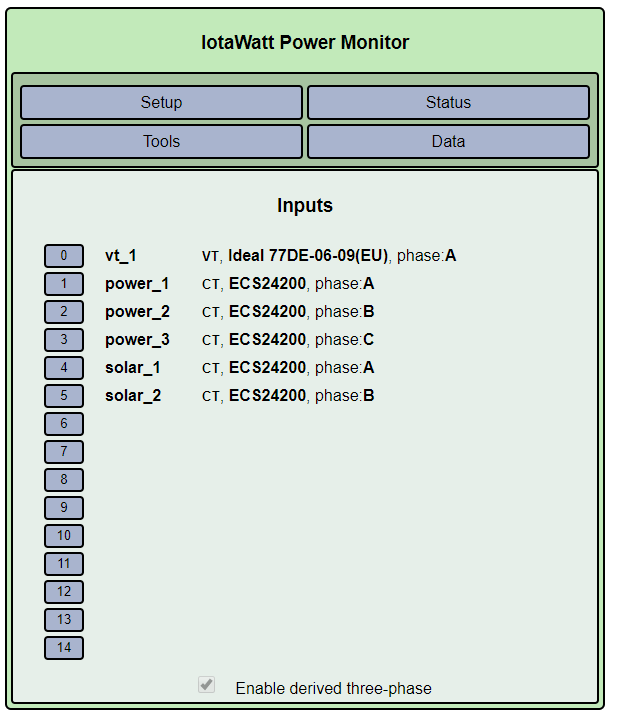 Here is the status:

Here is the status of an other monitor (Smappee) installed in parallel: 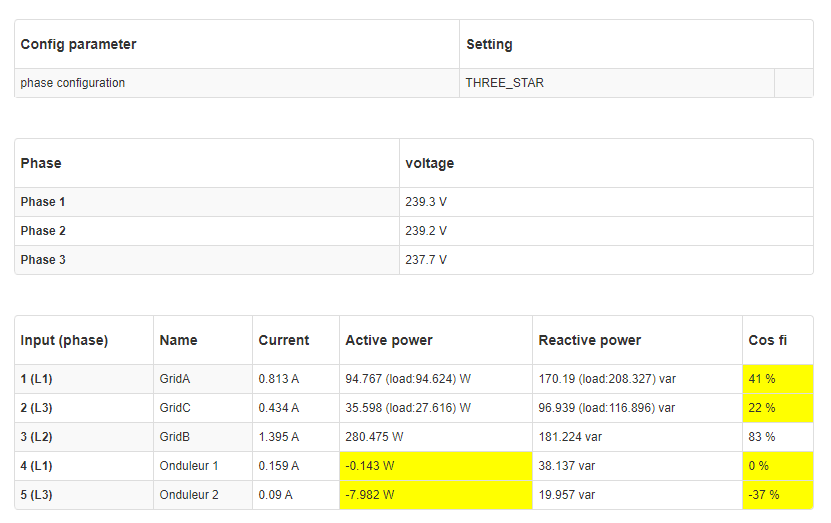 Without knowing anything about the load, i don’t think the IoTaWatt or Smapee are producing credible results.

There are dozens of combinations of phase assignment due CT orientation possible. Only one is correct. There is a method to follow to arrive at the correct solution.

First, I would ask that you set all of the inputs to phase A and post the status screen along with a picture of the CTs as installed.

Here is the inputs config: 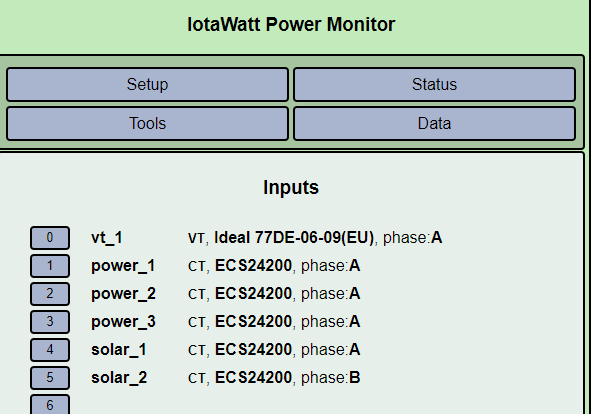 Here is the status: 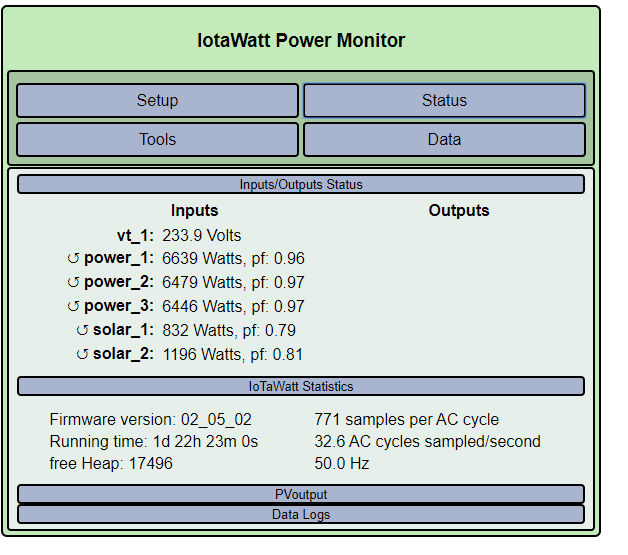 Here are the Smappee values: 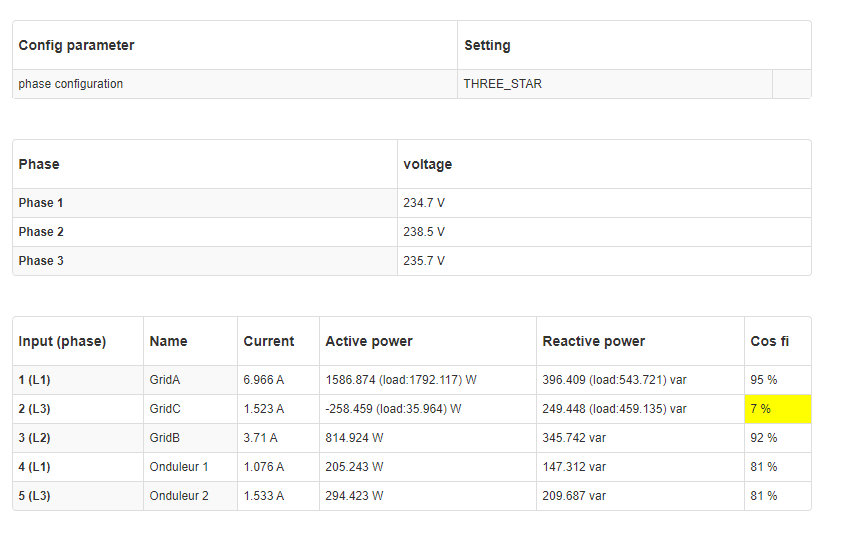 I have correct values with Smappee for more than one year.

Thans for your support.

Still trying to make sense of this.

First thing is that you bought ECS1050 CTs, which are 50A CTs. You have configured them as 200A CTs, so the values you see are all x4. Reconfigure as ECS1050 and at least one of those inputs should be in line with the Smappee. The three mains shown above would be:

Trying to reconcile the two on L1, the Smappee shows input 1 with 6.966 Amps and 234.7 Volts. That’s 1635 VA. With 1587 Watts the VAR should be 393, which is about what is shown. So the two are in the ballpark on L1, if in fact the IoTaWatt VT is connected to L1. Which brings me to asking again for a picture of the CT installation foe reference.

It’s important to know for sure which of the mains CTs is associated with the phase that powers the VT. The easiest and most reliable way to determine that is to connect a moderate load to the same plug as the VT and observe which of the three inputs increases. Cycle once or twice to be sure. Please do that and respond with the result.

If you have not yet calibrated the VT, you may want to do that. The procedure is in the docs at http://docs.iotawatt.com/en/master/VTconfig.html#voltage-calibration

If you are confident in the voltages that Smappee reports, you can simply calibrate to that once you know which of the phases the VT is on.

Post the two (IoTaWatt status and Smappee) again and we’ll try to figure out the correct phase assignments for the other two mains.

The CT configuration seems to be good now.

I have analyse the values of yesterday:

It should be a mistake in the PVOutput configuration 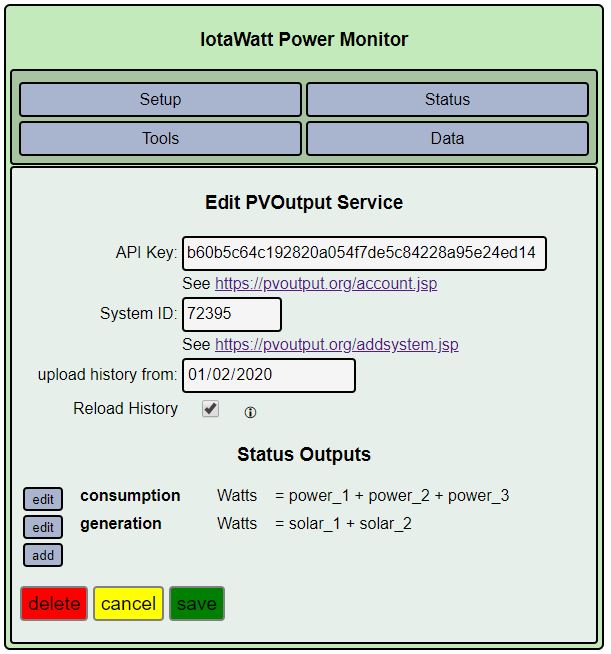 It’s important to know for sure which of the mains CTs is associated with the phase that powers the VT. The easiest and most reliable way to determine that is to connect a moderate load to the same plug as the VT and observe which of the three inputs increases. Cycle once or twice to be sure. Please do that and respond with the result.

Have you done this? It does not look like it.

You may think this is obvious, but it is not.

Frankly, what you have posted appears wrong to me, and the Smapee does not appear to be correct either. You can continue to fiddle with it until it matches the Smappee, but I doubt that will yield a correct solution. If You want to work with me one step at a time to get this right, that’s fine, but I can’t speculate on what is right or wrong without the information I’ve asked for several times.

I’ve plugged a load to the same plug as the VT and I confirm that the load was on input 1. I assume that the input 1 and the VT are on the same phase. It corresponds to what is indicated on the electrical box and to what I had imagined when installing the system.

Regarding the solar installation, I have two inverters 230V single phase wired to phase A (same as VT and input 1) and phase B (same as input 2). 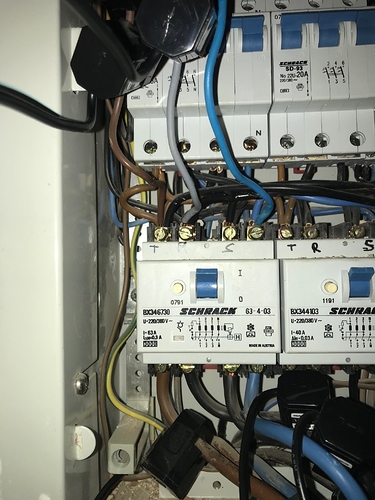 You should have right regarding the Smappee configuration. I have compared those information between 31 August 2019 and today:

I have also compared those information between on December 2019:

I think I’ve got enough to make a pass at this, with the reservation that a photo of the IoTaWatt CTs may change my understanding.

Lets take a look at this set of screenshots:

In a simple system, this is no problem. IoTaWatt simply makes the negative positive and everything works out. When there is solar generation flowing out through the mains, it’s a problem. The signs must be correct and they must be allowed.

By the documentation I was able to find on the Smappee, the voltage references are hardwired. There is a common neutral and individual “hot” conductors for each phase, so polarity is known. In this case IoTaWatt is using a VT with a standard two prong Euro plug. It can be inserted either way. The odds of the polarity correctly matching the CTs is 50-50. You guessed it, it’s 180° out of phase.

There are two ways to correct this:

Once this is done, there should only be negative values in the power_1 and power_2 mains when the inverters are producing excess power. (There is a negative issue with the inverters that I’ll get into later).

At this time I want to point out that the Smappee is flagging the power factor of input 2 as .13 . Most of the other PF values are reconcilable, but I can’t figure out why it’s doing it here. Computing the apparent power from their numbers I get 3,699 VA. Power factor should then be 3684/3699 = .996. IoTaWatt shows 1.00 (unity) which is what I would expect with a solar inverter providing all of the power that is being exported.

These PF anomalies were causing my initial questioning of Smappee. I think they are incorrect, but they may have some other justification for it. Regardless, when they are ignored, the actual power values appear to be close.

The last thing to note about this set of displays is how the IoTaWatt and Smappee compare in Active Power values. First note a little confusion in that input 2 for both units uses what is Phase 3 in the Smappee (240.9V), and input 3 uses Phase 2 (236.8V)

IoTaWatt is using derived voltage reference, which means it uses the Phase 1 voltage (240V) for all three phases and numerically shifts the phase. So it’s results will differ proportional to the reference voltage difference.

So the three mains compare as:

power_1 is the net difference between significant consumption and generation, so unless the two values were somehow taken at the exact same moment, I would not put a lot of emphasis on the power_1 difference.

I’d like to point out here, for the benefit of others reading this, that you can add two additional VTs to IoTaWatt to get direct voltage reference on all three phases.

Now moving on to the second set of displays with “low sunshine”.

First let me say that it’s not clear exactly what’s going on with the solar. The running time is 20 hours after the previous “high sunshine” displays, so it’s 4 hours earlier in the day. Presumably early morning. The inverter outputs are ambiguous here.

Recall the ↺ symbol that we looked at in the mains. We see it here on the solar_1 input, but remember that everything is backwards due to the 180↺ VT orientation, so actually, IoTaWatt is saying that solar_2 is showing backwards power. This is common with inverters. They consume power while in standby mode, and 21 Watts is fairly typical.

The other inverter does appear to be producing power to the tune of 38 watts. I speculate this is due to PV panel orientation being more easterly on the solar_1 array.

The Smappee doesn’t appear to differentiate between generation and consumption of the inverters. Both appear positive. This could simply be that the two screenshots were taken at different times and the second inverter is now producing, or it could be that the Smappee gets it right but doesn’t display the negative number. It’s a third order issue at best, so moving on:

In addition to the sign, there is also a difference in magnitude between the IoTaWatt and Smappee with respect to the inverter out here. Again this could simply be the result of simply taking the screenshots at different times - even a few minutes will show significant changes during the early morning ramp-up. Another possibility is that the two units simply have different accuracy when the current is 160mA. Which is the more accurate isn’t really that important because if you look at the “high sunshine” above, with the solar_2 adjusted for the derived voltage, the two inverters are within 0.4% difference between the IoTaWatt and Smappee.

Given the above reconciliation of IoTaWatt and Smappee, it’s reasonable to expect pretty accurate results with PVoutput. Unfortunately, the configuration shown in a previous post will not produce that. There are several ways that solar output can be introduced, and now I have enough information to get into that.

First, I’d recommend that you read tyhe documentation at http://docs.iotawatt.com/en/master/PVoutput.html

It uses the North American split-phase case, but the principles are the same with respect to how the consumption is specified. Here is what you posted: 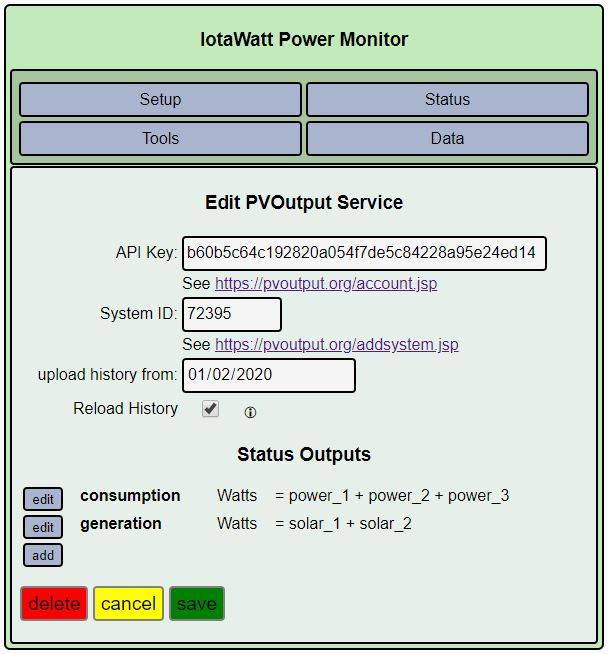 So here the generation is pretty straightforward, and you seem to be satisfied with the result on PVoutput. The difference between the two is less than 1% which isn’t bad for two inverters and 5 minute resolution accumulation in PVoutput. The IoTaWatt probably has a more accurate value, and I need top point out here that if both inverters are each using 20W on standby, that’s 0.64kWh of standby power consumed by the inverters over 16 hours, which is
about 5%-6% of your total generation. Food for thought.

Your consumption calculation is wrong on two fronts:

So what to do about it.

Note that all of these changes are based on the expectation that you will reverse the VT as explained in the beginning. None of this will work properly if that isn’t done.

Let me know how you make out, and could you tell me the name of your PVoutput station so I can see that as well.