What does this query error mean ? and Why?

This runs fine 99.99 of the time - i note sometimes that i will be returned an error - and this gets interpreted by Node Red as 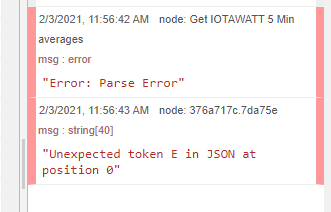 Is this to be expected that sometimes a query will fail - or should i start digging through the logs on IOTAWATT ?

Is this to be expected that sometimes a query will fail - or should i start digging through the logs on IOTAWATT ?

I doubt you will find anything in the message log, but easy enough to check. You have a timestamp from nodered.

It looks as if the message is generated by nodered because it can’t parse the response as json. That probably means something went wrong with the query transaction, but it’s not obvious that it’s the IoTaWatt per-se, could be a communication issue. I don’t know enough about nodered to say.

What would be helpful is the response that is causing the parse error. I suspect it’s not Json as it says it’s at column 0, which would be a ‘[’ in this case. If it happened more frequently, I’d recommend using wireshark, but it sounds like it only happens every few hours, so that’s a lot to capture with the shark.

That’s not the typical private IP range, so is there any kind of routing going on that could be introducing erroneous responses like 300’s or 400’s?

Thanks for the quick response Bob,

Yes that is my home network range (i do networking for living) - the IOTAWATT, Wireless Router and Node-Red all exist on that subnet (which is a VLAN) - so no there is nothing else in the middle - it is only for IOT devices so is not heavily used.

I have put a debug node before the JSON conversion on the HTTP node in NR - when i get the next error i will grab the output and let you know.

WIll monitor and advise back

Here we go - here is one now 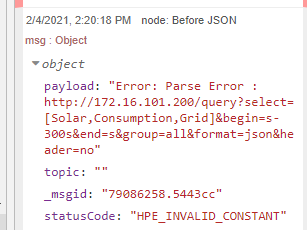 Doesn’t look at all familiar. The URL part appears valid, but the "Error: Parse Error : … is nothing I recognize. The only way that could be coming from the IoTaWatt is if it is being generated by the webserver code, but I’ve never seen it over years working with that webserver component. Sorry, I can’t help here.