Which Voltage Reference VT do I have?

Confusingly the actual transformer itself says Ideal Power and TDC on it… Im guessing probably the top option (though not sure what the 77 bit is?), but it reads quite a high voltage (251V) while other meters in my house are more like 245V. Obviously the other meters may be inaccurate, but I just thought I’d check Im using the right VT setting first…

It’s the Ideal 77DE-06-09(EU). I will check the calibration of recent models. 251 Volts is quite high. I’m assuming this is the UK with 240V. If you have a meter that you believe is very accurate, there is a simple procedure to calibrate your VT.

Thanks! Im afraid I don’t have any that I know are high accuracy, I just saw 253V when plugged in and thought that was impossible, and it hovered at 251 for most of yesterday.

I have a fairly basic multimeter, and a kilawat style device and they reported ~245V. I can do a calibration on these if needed, but obviously not sure of their accuracy. Yes I’m in the UK.

I’ve been looking into this and now realize that although the physical appearance has not changed, the newer DE-06-09 VTs are efficiency level VI as opposed to the older level V. The level VI units have calibrate about 0.3% lower than older V units and about 0.6% lower than the original unit that I measured.

There is also a very significant difference in phase shift between the original unit and later V and VI units. I’ll be adding a new table entry for the VI and probably splitting the difference for the older V units.

Regarding your unit, could you please post a picture of the label?

Ah thats good to hear. Yes this is a VI unit.

Does this image work for you? (I drilled something into the wall which seems to have sprinked a light dusting over the plug despite it being over 1m away!) 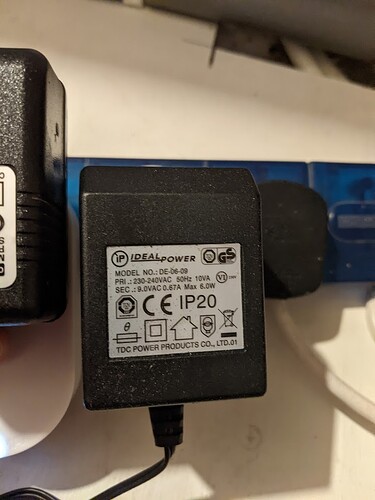 So 251 seems high but it is within the permitted range.

As I understand it, some of the UK has converted to 230V and other areas remain at 240V. That’s why the upper end is +10%. It’s expensive to change all those transformers, so I imagine it’s being phased in over many years.

I did uncover an issue with calibration between the original DE-06-09 that I have and later models, both level V and level VI. The adjustment should bring that 251 down to about 249. But that’s still pretty high. It begs a good meter to verify.

@cjcharles used a “killowatt type” device to measure 245. In the USA, a brand-name klill-a-watt is very accurate. I dont know if this is a kill-a-wall or some other plug in device. Cheaper meters don’t do true RMS, instead they adjust the peak voltage for the expected difference or use some other compensation.

Plots that I’ve seen of UK power are not good sine-waves. They have a flat spot on top which would drive up the rms using a true-rms meter. So that might explain the difference.

At the end of the day, if the voltage is that far off, it will show up in a reconciliation with the meter. So time will tell.

I’ll try and get an oscilloscope onto the sine wave (it’s in storage), and perhaps that will give me the best answer. I have one that’s about 30 years old and hasn’t been used in 10, but it’s probably still reasonable as it was a good one.

The killowatt device I have is not official, just an equivalent, but it also matched the reading on my multimeter. I’ve never had a calibrated device to check UK voltage, but every device I’ve ever used (I was trained as an electronic engineer), including many of the killowatt style devices, has shown 238-245V - certainly a fair bit below 253V which Iotawatt showed for an hour or so.