I’m using a 3-phase 230V system with three independent voltage references. One of the phases (T) has false readings quite frequently, sometimes only a spike, sometimes over a longer period of time. What could be the reason for this? 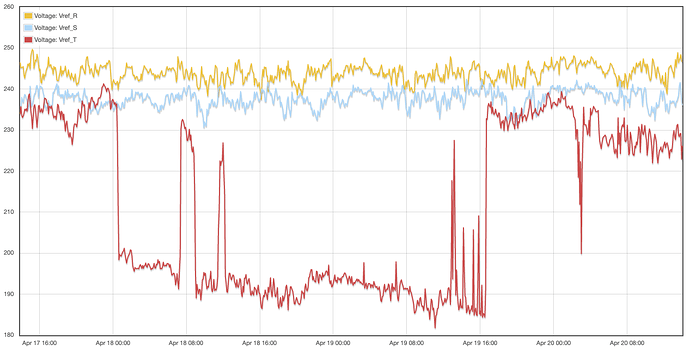 You probably have your reasons for thinking it’s a false reading, but I have no basis for making that assumption. What makes you come to that conclusion?

I made some manual measurements some time back and also replaced one of the reference voltage generators. Did you ever encounter anything like this? What I can do here is that since I have a home automation system in place, I’ll put an alert on values that are unlikely low, and I can make manual measurements again just to be sure.

The easiest thing would be to just swap that VT to a different phase and see if the problem moves with it.

Sure, I’ll try that.

I swapped reference inputs 7 and 14 that are configured for two of the three phases (0,7,14) and the problem remained with the phase whose reference input is at 14, it did not move, therefore I assume the input is wrong somehow.

If I understand what you are saying,that should indicate it’s not the transformer, but not ready to say it’s the input at all.

When you swapped the VTs what exactly did you do? Did you swap the both the socket and input they use or just the socket?

Looking at your original post, the voltage dropped to around 190 Volts for a 40 hours, then went back to normal. Have you determined that the voltage did not indeed drop?

I have a V4 unit, not a V5. Firmware version is 02_05_12. From what I see in the configuration UI I can freely configure any input as VT or CT. I just did so some years back. Now I swapped the VT plugs 7 and 14 on the device side and nothing changed so I assume the problem could be with input 14. I made external measurements again and again and the real voltage readings do not drop. I can reconfigure in a way that I relocate the VT to an input other than 14. Please advise how to proceed.

Nice. Did you think it was not important to tell me that the unit has been modified to adapt CT inputs to accept VTs? What could possibly have gone wrong with that?

Yes, you can configure any input to be a VT in the software, but you can’t directly plug a VT into them. Prior to the V5 there were several methods being used to adapt the CT inputs for VT use. They all required using resistors and some involved removing the burden resistors. Some dissipated a lot of power, some did not. Some incorporated the built in burden resistor, some did not.

So you would need to elaborate on the modifications used to adapt the VTs to the inputs. It’s possible that damage was done, but I think more probably that there is a bad connection or solder joint. I can’t speculate any more than that without seeing what you have.

So I would need to know what kind of modifications you made to adapt the VTs to the CT inputs.

I did not modify anything, but when I ordered it from you, you sent me two special cables that already contained the burden resistors. I just plugged them in. Shall I then examine the solder joints on the two supplied cables?

OK, fair enough. A couple of years ago prior to the V5 I provided a few users with custom cables to do that, and I also made some adapter boards that did the same. There were several different methods used. I don’t recall making up your adapters or how they were constructed.

Figuring this out should be straightforward, but it involves understanding the components in play (now includes adapters), and exactly what is being done.

Now I swapped the VT plugs 7 and 14 on the device side and nothing changed so I assume the problem could be with input 14.

Does this mean that you swapped the VTs with their associated adapters, or just the VT leaving the adapters in their original inputs? In other words did you (respectively) swap the 3.5mm stereo jacks or the 5.5mm barrel connectors?

I left the whole cable intact, I just unplugged the two 3.5 mm jacks from nr. 7 and nr 14 place of the device, and plugged them into the other’s former place (swapping).

Ok, since you can use any input, next thing is to move the VT in 15 to another input, preferably 1-6.