Hi all.
I have found this thread, which explains exactly what i am trying to do, but i feel like I am missing something
https://community.iotawatt.com/t/iotawatt-outputs-not-showing-in-emoncms-input-list-solved/1307

All my inputs are getting published into EmonCMS perfectly. I want to add some outputs/functions, and this is where I am getting stuck.

I have tried to add extra Emoncms inputs, but as soon as add a new one, no matter what i do theres never a save button! 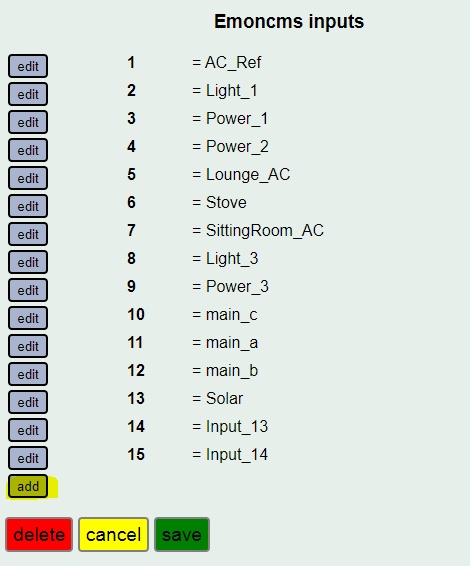 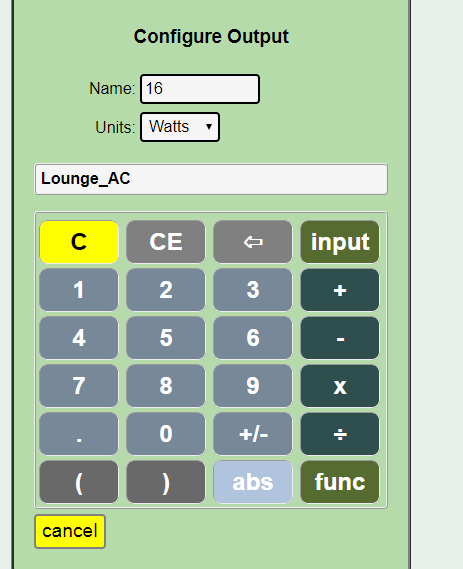 Have i just missed something simple ?

The name field (first box) is the new name. To fill in the wide field hover over the input button, it calls up a menu of fields, and click them, then an operator (e.g. +) and repeat for an additional field.

As @Linwood stated. The name of the feed is at the top of the window. Below in the section you were typing the name is what you want the assigned output to include. Something like (Main1 + Main2) would assign the given output the total of the two mains; in a split phase system. You could do something like (Main1 + Main2 + Solar) to get an idea of home consumption; etc.

Once you have a formula that is valid and a name in the top, the SAVE option will appear. It will not let you save without a valid input.

Have i just missed something simple ?

If so, I’ve missed it as well. Can you try a few things to narrow it down?

What happens when you press “edit” for an existing output? Specifically, does the calculator appear with a Save button?

When you first select “Add”, you should get the calculator and it should look like this: 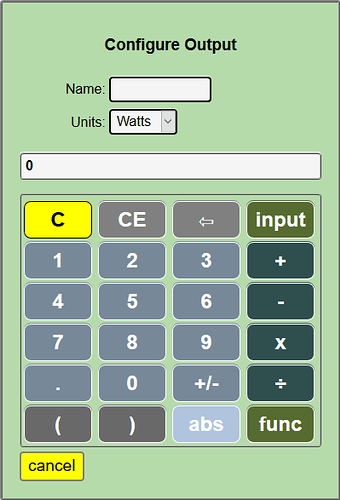 Now could you type 16 and then tab and see if Save appears?

I am not sure what I was doing, but ive tried again this morning and I managed to get it to display.
Maybe i never had a correctly formatted function

I worked out the problem.
Ive had it happen 2 or 3 times now, where it wont let me save any sort of output function.
If i refresh the web page and start again, the save button appears.

What browser and what platform? Does it support HTML 5?

Windows 10 and Chrome. Not sure what version of chrome but can find out later if it’s helpful.

That should work. One thing that occurs to me is that the display is not updated with each keystroke, only after the cursor is moved out of a field that has been changed. Is it possible that is the issue here?

Could be I will keep that in mind when I next edit something.

First timer inching my way in. I’m posting here because the above discussion outlines my first insurmountable problem. The “save” button just will not appear when I attempt to create my first calculated output, even after entering the label, units and function. Tried a different browser, same thing. Refreshed the screen; the Output dialog box just disappeared back into the Setup button. Tabbed around, cursored around. No dice. Suggestions?

Could you post a screenshot where you think everything is OK but no save button?

Overeasy, it looks exactly like the screenshot a few posts up. UPDATE: I’ve been playing with it, and I actually got it to work. But the appearance and disappearance of the “save” button seems random to me. For example, I typed “Main Power” as a label, and tabbed. No save button. I reselected the box and typed “boop” and then tab, and “save” appeared! So I slowly overtyped “main” and then tab, and save disappeared. Sigh. I think it’s what side of my mouth I hang my tongue out? 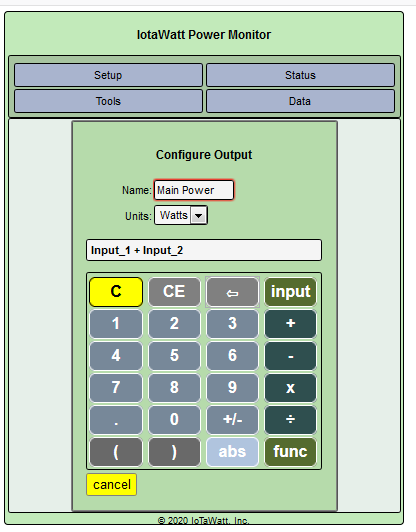 It’s still doing it. Tried replicating my previous success, doesn’t work… as you can see, no save button despite, I think, filling in all the fields appropriately. Edit–just realized that if I don’t use a space, i.e. MainPower, it accepts that now. My first attempt, at one point, accepted that name WITH the space. So…

If it helps,i think my issue was as @overeasy stated, in that you have to move the cursor out of the display.

I cant be 100% certain though, as i havent been able to replicate the issue. I was even doing some minor mods to those functions yesterday and it was fine.

Oh, a lot of the UI seems to be driven by hover/mouse over events, using keyboard shortcuts means those actions don’t get triggered

I seem to recall that being part of my issue too!

The tip-off is that name is glowing red. 5h3y cannot have embedded spaces. If you did previously succeed in using a space, you should be able to show me that name in the outputs display.

Overeasy, you’re right. They key is NO SPACE allowed. Other than that, it’s just a matter of tabbing or cursuring off the box in order to input the data. A little humbling to be tripped up by such a simple thing.