I had a need to monitor and plot temperature with my IoTaWatt. This need was brought on by what I believe is a misbehaving heat pump.

I reasoned that I could run the output from a 4mA to 20mA temperature transmitter through the CT shunt resistor of an input and figure out what the “Turns” ratio needed to be and do an output calculation to present temperature as Amps and a simple mental correction of 1 amp = 1 deg would suffice.

Prior to purchasing a temperature transmitter I experimented by using a AA dry cell and an additional series resistor to limit current flow and found that the IoTaWatt will accept a DC input although as Overeasy let me know that is a constant 0.8mA offset in the system due to the AC bias circuits.

For the output I realized that I needed to offset it by 75 deg C to see the correct temperature. I configured on output, named it Temp, selected Amps as my unit of measurement and subtracted 75 from the selected input. This got me very close. Now for that 0.8mA offset. It was making my reading 5 deg C low. I changed my output calculation to be input - 70 and everything worked out fine and was certainly close enough for my needs.

Below are a plot of temperature in Deg C. (it shows as Amps) and my heat pump current. This was a very mild example. More often it is much much worse. 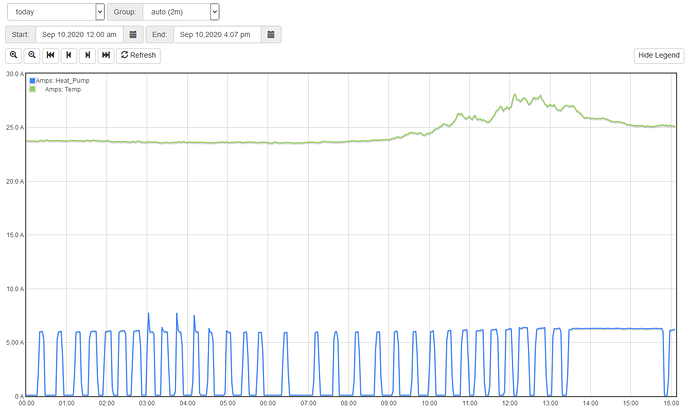 I was interested in why my heat pump was spiking current at night. Those spikes represent time that the condenser fan was not running. I believe that the fan should not do this in A/C mode. Of course in heating mode it is necessary for it to not run during a defrost cycle. It seems like the controller is going into a defrost while in A/C mode. Sometimes my heat pump would run and the fan would not and after several cycles of this misbehavior it would go into a lockout state that it could only be recovered from by power cycling the unit.

The components I used to do the job follows: 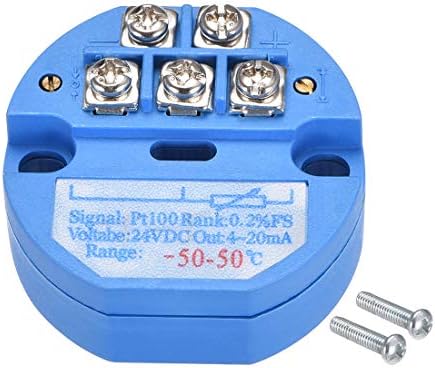