I’m interested in installing iotawatt in my home in Massachusetts. I am comfortable with software and programming, and like that iotawatt will allow me to log data from multiple circuits into open source databases for analysis. I’m not comfortable with electric wiring, and could really use expert advice on what to buy and how to get it installed safely.

My goals are to

We have 200A service and only one electric panel currently. If and when the heat pump system is installed, we will likely add a 100A sub-panel. I have attached pictures of my panel. I don’t have a photo of it with the cover removed because I do not feel qualified to remove it myself safely.

Is there anything I need to learn or other information I need to provide to choose the right iotawatt hardware and have it installed safely? I’m willing to put work into this but not sure where to begin!

Thanks in advance for your help! 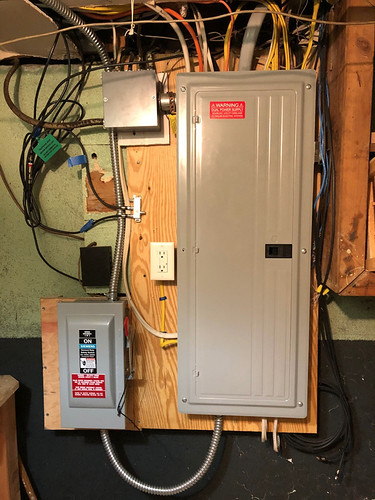 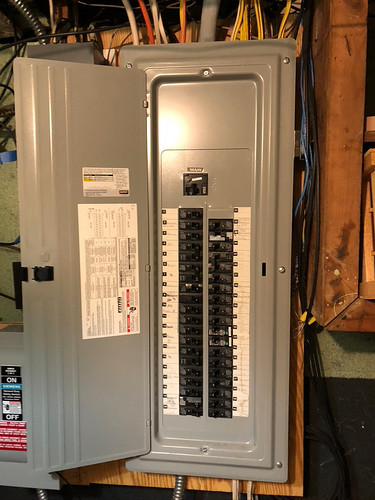 Safe to say that an IoTaWatt North American bundle with 2x 200A CTs for the mains is the starting point and one 50A CT for your solar. That will measure whole house consumption as well as solar generation and net usage.

Without specific information about the branch circuits you want to measure, it’s not possible to offer more than general advice. You will need one CT for each 120V circuit and 240V two-wire circuit (no neutral). You will need two CTs for each 240V three-wire circuit or one CT if installed as described in the documentation. Circuits with breakers greater than 50A will need 100A CTs.

You can connect a total of 14 CTs (includes the mains).

I recommend having an electrician or someone comfortable with working inside an electric panel review your requirements and install the equipment.

Thank you very much for the quick advice!

I noted that the AccuCT 50A x 10mm split-core is for “Solar Inverters to 12kW”. My array is 12.48kw capacity, but I have never seen it generate above 10kw. Can this CT be installed and used safely?

PV arrays are usually expressed in terms of the DC output of the collectors. If you have 30x270W collectors, that’s would be an 8kW system. Depending on orientation and local insolation, you will typically see less AC generation than the DC capacity. If you have never seen more than 10kW, that may be the capacity of your inverter. You would see maximum output on a bright, but cool day - usually early June in northern areas.

Would there be any safety issue if the output happened to peak above 12kw, or would I just get inaccurate readings?

You are asking me if it’s safe to operate the CTs above their rated capacity. The answer is no.

Safety is a “funny”/special/lawyer-involved word. When you use that, you are generally asking that can I do this an sue you if something bad happens. This is why you see so many safety warning labels on products. But, as Bob pointed out, there is a simple solution, get the 100A CT. The 100A CT is physically bigger. Some might argue it will not be as accurate at lower currents. They might be right, but does it really matter for your use case? What decisions are you going to make with the data?

I regularly look at readings from my 50A CTs to see 1W differences in usage. Are they real? Does the CT have enough linearity and repeatability for the readings to be trusted? (Unclear, since those are not spec’ed.) But, for my usage I can tell that the old system I had controlling the heater in my goat yard used about 3W more power than the new system.

So, it is safe to use a larger capacity CT on a smaller line. It will also give you very good results. I have been running two CTs on the same line. One is a 200A one and the other is a 100A one. Here is a graph of the difference between them 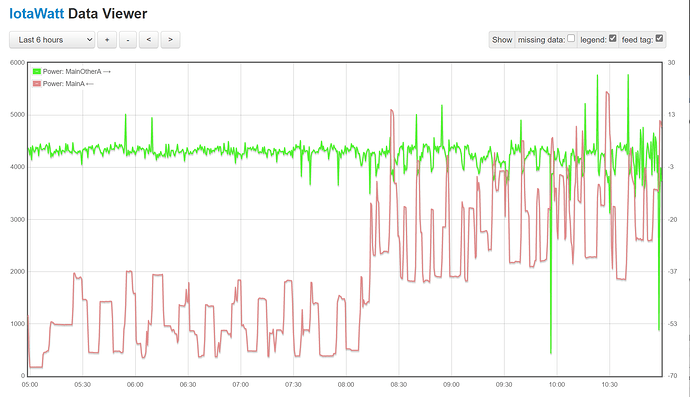 image1807×1042 171 KB
Most of the time both CTs measure the same wattage (within a few W). But, you will also see that there are a few spikes, where the numbers differ by a significant amount. If you look closely, you will notice that they occur at points where the actual power being used is changing significantly. This is likely due to the fact that IotaWatt does not sample all channels continuously. So, during a change in power utilization, one channel will read the old value and the other will read the new value.

Here is a zoomed in view: 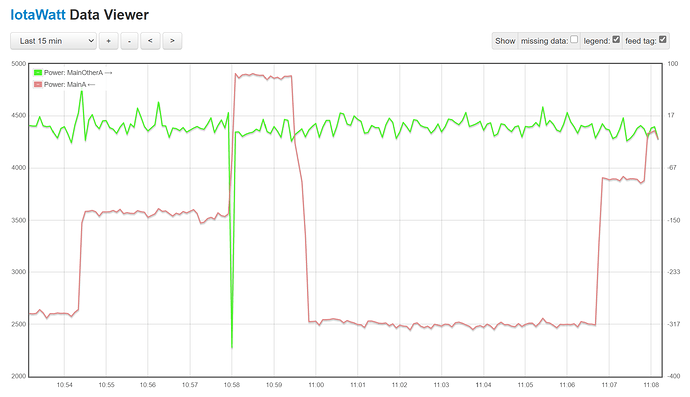 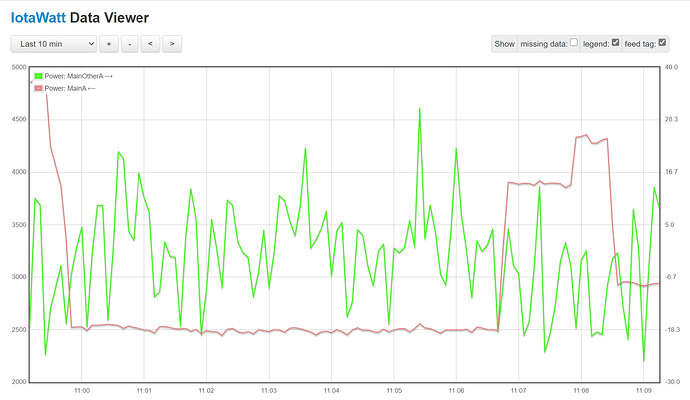 Thanks to both of you! I’m not trying to ask lawyer-y questions, just asking dumb questions out of pure ignorance. Feels like my next step should be to find an electrician who is comfortable helping with the install.

The main entrance cable appears to be the big gray one that is probably 4/0 for the main conductors. It looks like there is lots of room, so CT placement should be easy enough. But, yes, you will need someone to open the panel and take a look around to see how to wire things up.

Since you already have 39 + 2 circuits/breakers, you will need to make some choices about what you really want to see. It is really easy to say EVERYTHING. But, think about what you are really going to do with all that data. I first started down this rabbit hole/journey having just the instantaneous usage value for the whole house. That was interesting but really hard to visualize and turn into information to make inferences to make decisions. Many years ago, I got a system that had 2 channels for the mains and 5 additional ones. That helped, but load disaggregation turns out to be a really hard problem. I did gain some information and did make some decisions (I bought a Heat Pump Water Heater). Several years ago, I bought my first IotaWatt. With 14 channels, I had more data, but still it wasn’t enough. So, I bought a second one. With two, I could actually measure the voltage on each leg to see just how different they really are. But, this meant I had to use 2 channels for each of my 2 water heaters and 2 main pumps, so I combined them in ways that would let me tell which was running. But, the two pumps look very similar and don’t run for long, so hard to see in the data. I had been thinking about getting 2 more IotaWatts, but I decided to actually look at the data and do the math to see if I REALLY cared about the inaccuracy from assuming both legs have the same voltage. I am reasonably convinced that I don’t really care that much and I would rather know when things are running. So using the same 4 channels, I can get independent data on my big loads.

Since you probably don’t know what you are going to do with the data, I would start with a single IotaWatt. On my first system, I got lots of “extra” CTs to allow me to try looking at different circuits to see which ones are really interesting.

The variation in voltage between the legs, caused by unbalanced 120V loads and resistance in the neutral conductor, is something that keeps coming around. I took a hard look at this quite awhile ago, so it’s time to revisit that:

I’ve been monitoring my US split-phase service for two years now using a single 120V reference on one “leg” of the service. The results have been excellent, with overall and individual results within 1% of the utility meter and several revenue grade EKM meters on individual circuits. I long ago became comfortable with the notion of the single 120V reference, even though that voltage typically varies between 119V and 121V throughout the day with excursions even further off the mean from time to…


I did take my own advice and have my production IoTaWatt setup with the 230V Euro transformer connected to my 240V. I scale down the calibration to 120V (actually calibrated to half the 240 voltage). When doubled for the 240V loads, it’s always exactly right. More than half of my usage is from 240V appliances. The total of the error for the 120V legs is also reduced significantly.