Most of the CTs come with a 1.5m (~5’) cord with a 3.5mm stereo jack. There is regular interest in extending these for various reasons.

I have long advocated for the use of commodity headphone extensions for both of these applications. Many have sourced them and with the exception of one user who got defective extensions (crossed connections), there have been no negative reports.

CTs produce a current proportional to the primary measured current. They push this current, regardless of resistance, to the extent that they have the power to do so. IoTaWatt inserts a 20Ω ballast resistor into the circuit. The standard 1.5m lead on the CT is about 0.3Ω. The primary consideration with an extension is that it does not increase the resistance to the point that the CT cannot push a proportional current, and secondarily, that increased resistance may increase the phase shift significantly.

What I found was that the shorter commodity extensions can add resistance, although not a deal-breaker up to about 12’ 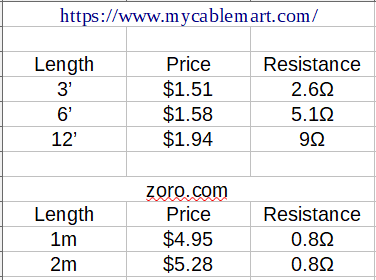 All are slim and supple, and produce the same results compared to a control CT connected to the same circuit without an extension.

I tested a 50’ from MyCableMart and although it seemed to work, the resistance was very high at 42Ω. I would not recommend it and will continue to search for a source for longer extensions. Most users have opted to adapt CATn wiring for long runs. Perhaps a RJ45 - 4 x 3.5mm jack adapter would be a better way to go for long-haul.

FYI, I purchased a couple of these 12ft extensions from Monoprice which seem to have worked well. Admittedly I haven’t done the level of testing that Bob does, but looking at a 60w light bulb on a circuit with and without the extension didn’t seem to make much difference at least at the granularity I cared about.

Good price. I tested some 3’ that appear to have the same connectors. Resistance was very low so better gauge of wire. Only downside was that the male connector is larger than 11mm in diameter, so can’t plug in two side-by-side. Sometimes (often?) the pictures don’t match the product exactly, so maybe not the same manufacturer.

Hey all,
I just taken delivery of my new IoTaWatt here in AU a few weeks back, and now my solar is installed, I’m looking at getting this going.

As my meter board is outside and pretty packed full, I’m going to have to run my IoTaWatt in the shed, about 2m away- and run a conduit to the meter board.
I’m thinking I’ll run either a 4x cat5 lines (16 pairs) or 6x cat5 lines (24 pairs) to cope with the 28 or 42 wires needed for the CTs, with a little breakout box with 14x 3.5mm sockets to plug the CTs into.
I notice that the CTs have stereo plugs, but the circuit diagrams for the IoTaWatt seem to indicate only two of these pins are connected - is this just using the Tip and Sleeve (same as a mono) plug, and ignoring the ring, or is there something fancy going on that I need to be aware of?

Tip and sleeve is correct.

Some have used CAT wiring with success. Also see this post about standard headphone extensions.

Perfect, thanks for the clarification overeasy; greatly appreciated. I’ll have a go at fitting it in the next week or so and see how it all fits together.